SNP leader Ramkalawan to remain on Seychelles register of voters 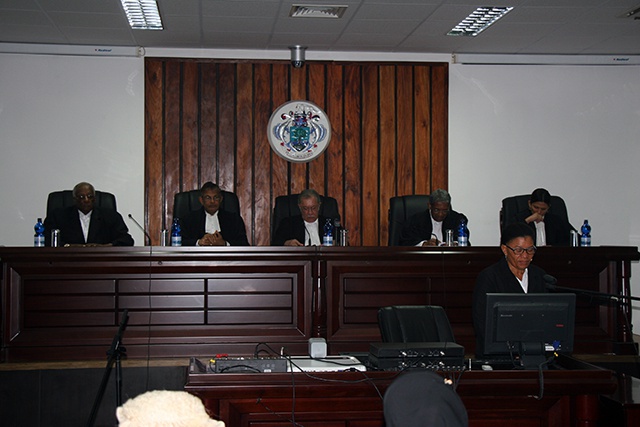 The court’s decision means the name of Wavel Ramkalawan, leader of the Seychelles National Party (SNP), will not be struck off the voter’s register and can run in September's parliamentary election.

During its ruling validating last December’s presidential elections in May, the Constitutional Court also accused Ramkalawan of committing an illegal practice.

This relates to a letter, which is said to have been published in the Tamil Language to voters from the Tamil Community in Seychelles, in which Ramkalawan had promised them senior posts in his government so as to entice them to vote for him or to refrain from voting for his opponent.

Ramkalawan was appealing against a Constitutional Court decision to have the matter reported to the Electoral Commission so as to have his name struck off the voter’s register.

Friday’s ruling was delivered over two and a half hours – with intervals – as the five judges in the case could not come to a unanimous decision.

The lawyer representing Ramkalwan, Bernard Georges, explained that the split related to the ‘standard of proof’ on whether the illegal practice being challenged was being proved on a criminal burden of proof or civil burden of proof.

In spite of this, the five judges agreed that the case should not be reported to the Electoral Commission, hence Ramkalawan’s name will remain on the voter’s register.

The decision means Ramkalawan will be able to stand as a candidate in upcoming parliamentary elections set for September 8 to 10.

“My client has won his appeal. We would not have had to be here had the Constitutional Court considered whether my client should be reported to the Electoral Commission,” Georges said to SNA.

“The terms used resembles a pardon but according to the law this is not the case. It is a decision that should have been taken but we will not do so,” he added.

On the other hand, Basil Hoareau, the lawyer who represented President James Michel on the matter of the petition Ramkalawan had brought asking to annul the presidential results and who also introduced the letter written in Tamil during the hearings, said he was satisfied that the Court of Appeal judges had acknowledged that Ramkalawan had committed an illegal practice.

“We anticipated that the court would and in the majority they have found that there was an illegal practice and it was open to the court now to decide whether to excuse him,” said Hoareau

"When asked to give our views on whether he should be excused we said nothing because it was not my client’s intention to have Ramkalawan’s name struck off the voter’s register,” Hoareau added.

Ramkalwan faced President Michel in a historic run-off in December, which was won by Michel with 50.15 percent of the votes. The opposition leader challenged the results through a petition during which both sides were accused of irregularities before the Constitutional Court.

An appeal of a Constitutional Court ruling that validated the election results is now the next political-legal challenge. The Court of Appeal will hear the matter in September.

Political tension in Seychelles, a 115-island archipelago in the western Indian Ocean, should heighten following the registration of candidates for the September parliamentary polls scheduled for next Wednesday.