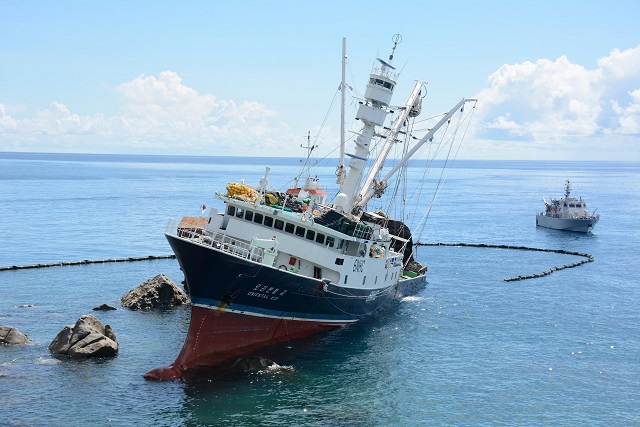 File Photo showing a grounded vessel off the northern coast of Mahe, Seychelles' main island with a boom deployed around the boat to contain a minor oil spill. Various stakeholders joined in a table top exercise as part of an EU funded project to test their preparedness should Seychelles have to face a major oil spill. (Patrick Joubert, Seychelles News Agency)

(Seychelles News Agency) - Seychelles has a comprehensive oil spill plan but it needs to be tested regularly, a European Union (EU) official said on Thursday.

Olivier Bézier was among a five-member team that conducted a two-day oil spill exercise in the island nation this week. The exercise falls under the EU’s Critical Maritime Routes in the Indian Ocean project (EU CRIMARIO).

“One main weakness, fortunately for you, is that you were never hit. The plan and all the fundamentals exist but those that would be involved during an oil spill need more training to prepare them for any eventualities,” said Bézier.

The exercise was an opportunity for relevant agencies to test their preparedness and inter-agency collaboration in the event of an oil spill in the waters of the Seychelles, a 115-island archipelago in the western Indian Ocean.

It was done at the request of the Seychelles Maritime Safety Administration (SMSA), following a March incident which saw the grounding of a South Korean tuna fishing vessel.

A minor spill of oil due to damages to the boat could be observed, as the authorities carried out a salvage operation to re-float the vessel. The incident occurred at L’ilot, Glacis, on the northern coast of the Seychelles main island, Mahé.

During this week’s exercise to test the country’s preparedness in the event of a much more serious and widespread incident, Bézier and team simulated an oil spill resulting from an accident involving two tankers. The scenario was that 20,000 tonnes of oil had been released at sea threatening Ile Platte, one of the Seychelles' outer islands.

Bézier said the Indian Ocean is one of the critical maritime routes for EU products.

“This is where our oil and manufactured goods are transiting from west to east and east to west. That is why we pay particular attention to the region in terms of security and safety,” he said.

Bézier said the EU CRIMARIO project places a lot of emphasis on inter-agency collaboration and sharing of information and that this was a strong element observed between local agencies during the exercise.

The participants were also coached on how to seek regional and international help in a timely manner in the event of an oil spill.

“Seychelles should understand that it should not face such a big scale event on its own,” said Bézier.

The exercise saw the participation of the Seychelles coast guard, maritime safety administration, the environment and health department, port authority and the division of risk and Disaster Management.

The main coordination centre was at the National Emergency Operations Centre managed by the division of risk and Disaster Management (DRDM).

The DRDM’s director general, Paul Labaleine, said the exercise was the most intense ever conducted for local agencies, as it had all the elements of a real life situation, from the beginning until the end.

“The agencies’ liaison officers who took part in the exercise needed to understand the specific role of their agencies in such an event; when they should come in and get involved and when they should step aside and I believe this has been achieved,” Labaleine said to SNA.

Labaleine said the exercise has also helped Seychelles to identify areas of weakness that would require international expertise, namely human resources and equipment. Outside agreements are needed with international partners, he said.

The need for more training for all agencies concerned has also been identified.