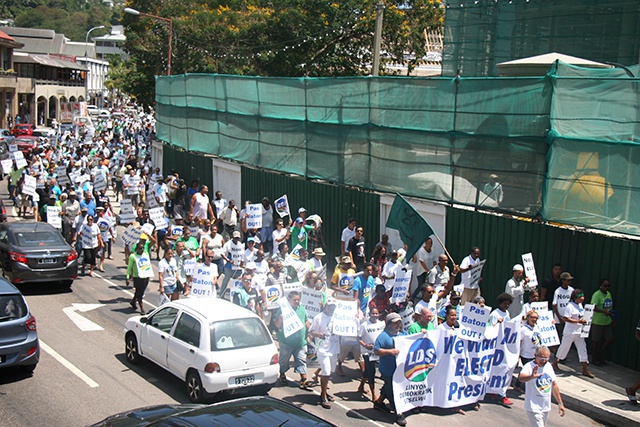 LDS is calling for the constitution to be amended allowing for fresh elections after the resignation of the president. (Rassin Vannier Seychelles News Agency)

The island nation’s President James Michel shocked the nation on September 27, announcing his resignation which will take effect on October 16, only 10 months after winning presidential elections held in December.

The head of state has decided to hand over power to  Vice President Danny Faure.

The Seychelles’ constitution allows the president to resign at any given time during his mandate, in which case the Vice President automatically takes over the leadership of the country, and appoints a new Vice President.

The opposition march Saturday protested against that coming chain of events.

"There is abuse within our constitution and what we are asking is for article 55.1 to be amended so that we can no longer hand over power to another person,” Wavel Ramkalawan, leader of the opposition in the national assembly, told SNA.

LDS says it would like to see a situation where should the president leave power, the Vice President is able to organise fresh elections within a given time frame.

"Seychelles must have a president who is directly elected by the people," said Ramkalawan.

Amending the Seychelles Constitution requires a two-third majority in the assembly, which means the president is not legally obliged to call new elections.

In an emailed reaction to SNA, the Chief Press Secretary in the Office of the President Srdjana Janosevic said she finds the rhetoric of the opposition to be confusing.

“They spent months calling for the departure of President Michel, insulting him, and concentrating all their efforts to remove him from power, and now that he is retiring, which is entirely constitutional, their first reaction is: "he does not have the right to do this.” Yes he has the right, it is clearly written, even if it is not in their favour. Indeed, without James Michel, the opposition has lost its sense of purpose, the fight no longer has any value, the hatred has no target,” said Janosevic.

The incoming president should be calling on the National Assembly to approve the nomination of a new Vice President in the coming days.

LDS has explained that the coalition has not made any decision and expects an announcement by the presidency before the inauguration of the new president on 16 October.

"We will recognize the new President Danny Faure, because there cannot be a power vacuum, but this will depend on what will happen after October 16," said Ramkalawan.

The opposition however voted in favor of a non-binding motion on Tuesday calling for the amendment of the section of the constitution relating to the resignation of the president.

President James Michel came to power in 2004 when the then-President France Albert Rene, the founder of the Seychelles People’s United Party (SPUP) now Parti Lepep, resigned and made way for his running mate to take over the rein.

Michel went on to win elections held in 2006, 2011 and 2015 – which was also his third and final mandate at the helm of the island nation’s government.