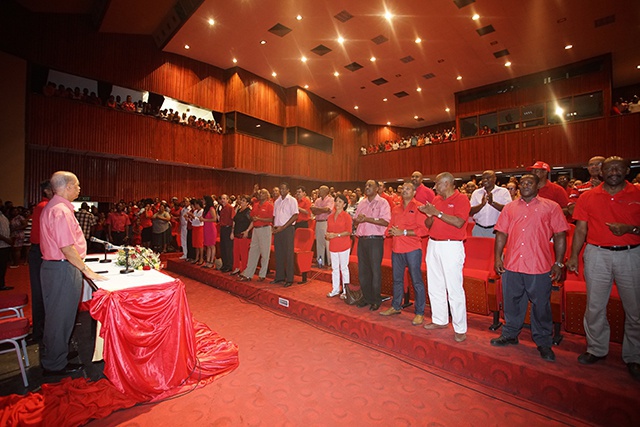 Officials of Parti Lepep came together on Saturday to back Vice President Danny Faure as the island nation's next president. (Mervyn Marie, Seychelles News Agency)

(Seychelles News Agency) - Parti Lepep sought the support of the party’s activists at the weekend to back Vice President Danny Faure as the island nation's next president. Faure is set to become the Seychelles’ fourth president on Sunday.

President James Michel, also the leader of Parti Lepep, who announced his intention to resign as head of state on September 27, addressed a symposium of the party’s supporters on Saturday.

President Michel explained that he had made the decision as he believes the Vice President has all the capabilities needed to bring the country forward, and called on the party to trust and support his successor.

"It's important that I give four years to my successor, so that Parti Lepep can come out victorious in the next presidential elections," said President Michel.

He called on the party to battle for a new cause, which will be "the welfare of the Seychellois" while preventing the opposition from coming to power.

President Michel said that he would remain the president of Parti Lepep to ensure that Vice President Faure can win the next presidential elections in 2020.

Vice President Faure also addressed Saturday’s gathering, promising to take measures to ensure the well-being of the Seychellois people, while calling on public servants to be more productive.

In the last parliamentary elections, which took place in September, Parti Lepep lost for the first time its majority held in the National Assembly.

Vice President Faure said that "he has already informed the Speaker that he would personally go to the National Assembly to lay out his programme before the Seychellois people.”

Faure will still need the support of the assembly to approve the composition of his government. He has implied that politics in Seychelles will become more intense and needed the support of everyone.

The opposition on the other hand organised a protest march in the Seychelles capital, Victoria, on Saturday calling for new presidential elections to be held in the island nation.