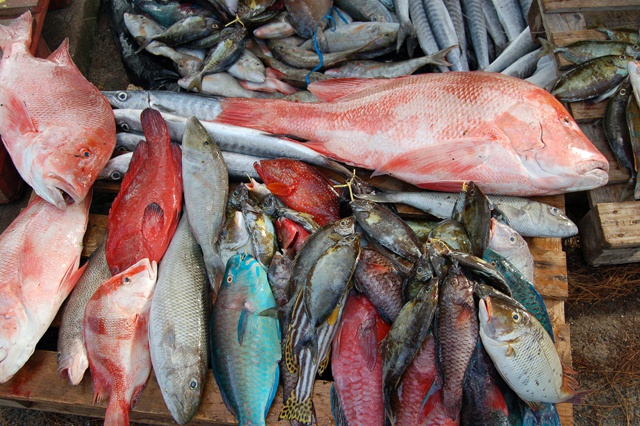 The prized 'Bourzwa' (emperor red snapper) among other fish caught in the Seychelles waters. (Gerard Larose, Seychelles Tourism Board)

(Seychelles News Agency) - A new project to gather data on demersal fish in Seychelles is aimed at validating claims that they could be over-exploited, the island nation’s fishing authority has said.

The Seychelles Fishing Authority (SFA) has partnered with the Seychelles Sports Fishing Club (SSFC) to embark on the tagging of the four demersal fish species, which are fish living close to the sea-bed.

SFA’s research officer, Calvin Gerry, says the main objective is to get a clearer picture of their stock.

“So far our catch data from commercial fishing vessels indicate that there might be over-exploitation of these four species, but we do not have any scientific data to substantiate this claim,” Gerry told SNA on Wednesday.

Seychelles, a 115-island archipelago in the western Indian Ocean started work to develop a management plan for demersal fisheries in 2014.

According to Gerry, a lack of data on the four species was among concerns raised by stakeholders, including fishermen, boat owners and other partners who worked on the document.

He added that having concrete data will give an indication of their growth rate, breeding ground, an estimate of their population and their movement pattern over time.

“These data will help with stock management as we will be able to come up with mechanisms for sustainable fishing of these species,” Gerry added.

SFA said that 7,500 conventional tags will be used in the project which will kick start in January 2017.

Only juvenile fish will be targeted. They will be measured, weighed, tagged before being released back into the sea. This is where the assistance of members of the Seychelles Sports Fishing Club (SSFC) will come in. Recreational anglers will be issued with tags and encouraged to engage in the tagging exercise during the club’s tournaments as well as during their own recreational fishing trips.

SSFC is already applying the catch and release format in at least four of its annual fishing tournaments.

The signing of the agreement to formalize the partnership was done last week by Tarek Patel, SFSC’s chairperson and SFA’s acting CEO Roy Clarisse.

Patel said at the signing that the sports fishing association “strongly believe(s) in monitoring and maintaining this stock for the future generation, so they have the ability to enjoy some of the fish we enjoy today and to ensure the stock, for food purposes, remain sustainable for the country”.

Seychelles has a total land area of 455 km² spread over an Exclusive Economic Zone of 1.3 million square km. Fishing is the second pillar of the economy after tourism.

This is the second time SSFC has partnered with the fishing authority to gather data on the stock level, movement and vulnerability of the various fish species found in the Seychelles waters.

A tagging exercise to collect data on billfish species – such as marlins, sailfish and swordfish among others was launched a year ago.

For the project which will begin next January, SFA is also encouraging the participation of commercial fishermen.