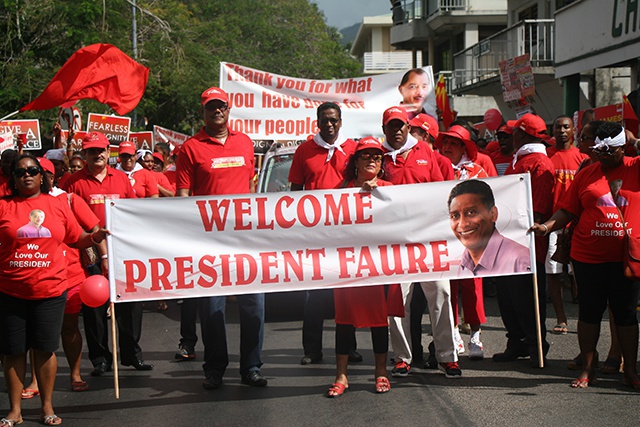 The Parti Lepep supporters wanted to show their approval of Michel’s decision to hand over power to Vice President Faure, who will become the Seychelles’ fourth president. (Rassin Vannier, Seychelles News Agency)

(Seychelles News Agency) - Hundreds of Parti Lepep supporters -- the party at the helm of the Seychelles' government -- marched peacefully though the streets of Victoria, Saturday afternoon, expressing support for Vice President Danny Faure.

Faure is set to be sworn in as the archipelago’s new president on Sunday afternoon.

This follows President James Michel’s shock announcement that he is resigning on October 16, only 10 months after winning presidential elections held in December.

The Parti Lepep supporters wanted to show their approval of Michel’s decision to hand over power to Vice President Faure, who will become the Seychelles’ fourth president.

This is the first time the party has organised such an event in the capital, since the return of multiparty democracy in the island nation in 1993.

Ruth Anacoura told SNA that "I came to give my support to the new President Danny Faure," adding that she is not in favour of returning to the polls to elect a new president.

"I am a supporter of Parti Lepep and it’s natural that I come to offer my support to the new president," said Raymond Bonte, adding that a handover of power is enshrined in the constitution.

"We must respect the constitution, and wait for completion of the president’s mandate,” Bonte added.

The Seychelles’ constitution allows the president to resign at any given time during his mandate, in which case the Vice President automatically takes over the leadership of the country and appoints a new Vice President.

Saturday’s march started at Maison du Peuple where the party headquarters is located, and went through the capital before returning to the starting point.

Parti Lepep officials led the way, but neither President Michel nor Vice President Faure were present.

Patrick Hermine -- former speaker of the National Assembly --  told the crowd that "tomorrow we will have a new president and nobody can do anything about it.”

"We will show our support to Danny Faure," said Charles De Commarmond, leader of the government business in the National Assembly.

The opposition is however not in favour of the handover of power.

LDS says it would like to see a situation where should the president leave power, the Vice President is able to organise fresh elections within a given time frame.

Danny Faure has said that he will address the National Assembly on Tuesday to explain his programme and present his new cabinet.