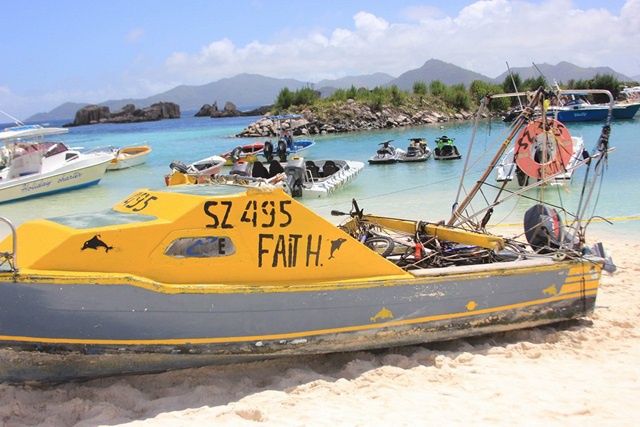 File photo showing a fishing vessel -- Faith which capsized in August on the shore of La Digue after being salvaged from the sea. (Vanessa Lucas)

(Seychelles News Agency) - Seychelles is benefitting from training offered by the International Maritime Organization (IMO) on the best way to go about investigating marine accidents.

Seychelles -- a 115-island archipelago in the western Indian Ocean -- surrounded by an Exclusive Economic Zone of 1.3 million square kilometres – has not been spared from accidents at sea.

In one of the most recent cases, three people died after the boat they were travelling in capsized off the coast of La Digue island in August.

The Director General of Seychelles Maritime Safety Administration, Captain Joachim Valmont, told SNA that the 10-day training now under way is therefore both important and timely, as it’s been found that the ability to carry out marine accident investigations was somehow lacking.

“The majority of the participants did not have the expertise on how to carry out a comprehensive investigation, from collecting the evidence, analyzing it and then compiling the report,” said Valmont.

Twenty-five Seychellois participants are taking part in the training sessions, which started on November 7 and will end on Tuesday.

Speaking to SNA on Monday, IMO’s lead consultant, Captain Babacar Diop said one of the main components of the training was to show the officers how to implement IMO’s code of accident investigation.

Diop said it’s mandatory for IMO members states to implement the code in the event of any serious marine accidents including when there are casualties, when a ship is lost at sea or when there is substantial damage to the environment such as an oil spill.

“Then you have an obligation to make an enquiry in order to determine what were the cause, why the accident  happened in order to prevent a similar occurrence and improve safety in general,” he added.

Diop noted that such investigations should be done in a comprehensive manner, beginning with the collection of both physical and verbal evidence, followed by the analysis stage, which will give the preliminary causes that led to the accident, and the final report.

He told SNA that all African countries are benefiting from such expertise from the IMO, a United Nations agency responsible for the safety and security of shipping and the prevention of marine pollution by ships.

For Seychelles, the training follows an audit which the maritime safety administration carried out in June to ensure that the island nation is complying with the International Convention on Standards of Training, Certification and Watchkeeping for Seafarers (STCW).

Diop said the audit, which is now compulsory for the 171 member states of the IMO, is to ensure that all countries reach a minimum level of compliance.

“As part of the audit there is a need for the country to demonstrate it has the capability to run an accident investigation and if they don’t then this has to be corrected, so the correction comes in the form of that training,” said Diop.

The Seychellois participants are from several organizations including the maritime safety administration, the maritime investigation board, the police, department of transport, coast guard, department for risk and disaster management and the civil aviation authority.

Captain Valmont said that six of the 25 participants will subsequently be appointed to sit on the maritime investigation board -- an independent body that carries out investigation into maritime accidents.

Prior to the marine accident investigation training, IMO also hosted a two-day seminar on Maritime Transport Policy. Valmont said the seminar coincided with the release of a draft copy of the Seychelles maritime transport policy that would allow SMSA to better manage its resources and maximize the use of ports. The policy is also one of the outcomes of the June audit by IMO.

Seychelles joins group that promotes women in the maritime sector