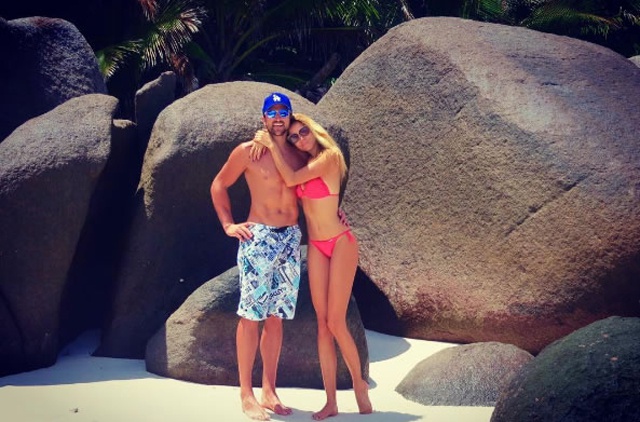 (Seychelles News Agency) - Serbian tennis player Janko Tipsarevic and his wife Biljana have documented a lot of their recent holiday to the Seychelles on their social media accounts, including a quirky video showing how they used a little imagination -- and a bit of alcohol -- to get over their boredom from rainy weather.

The couple were holidaying on the island of Silhouette – the third largest in the 115-island archipelago in the western Indian Ocean. Most of the granitic island is very mountainous and it is protected as a national park. Tourists holidaying on Silhouette can however choose between Hilton Seychelles Labriz Resort & Spa with over a 100 villas, or the cosy guesthouse of La Belle Tortue Lodge.

Tipsarevic shot his video ‘Blair Witch’ style in the dark with Biljana in front of him using a flashlight to look ahead, but despite Tipsarevic’s dramatic narrative, it seems the couple weren’t actually too far from the creature comforts of their villa after all.

“Ok...so...here's the deal. It was raining all damn day here… so @biljanatipsarevic and me… well… we got sad… and then we got a little tipsy… and then… well… you'll see…#Seychelles #silhouetteisland,” Tipsarevic wrote on his Instagram as he posted the video.

“It’s raining… its dark. We are so brave, going into the jungle!” he said in the video. “To the deep jungle of Seychelles! [laughter] Our room service is coming by the way... [pans camera to view of golf cart approaching nearby] but we are still so brave deep in the jungle, with our room service guy coming!”

After giving his wife a bit of a scare, it becomes clear that Tipsarevic’s ‘brave’ expedition to the ‘jungle’ was over, and the couple were keen to relieve the hotel’s room service waiter of whatever he had brought for them.

The island of Silhouette is steeped in folklore and spooky ghost stories from its old colonial past as a plantation, and even houses an old mausoleum belonging to members of the Dauban family which once owned most of the island, so perhaps it was just as well that Tipsarevic didn’t venture out too far into the ‘jungle’ after all.

Enjoying the off-season in paradise

Seychelles seems to be the destination of choice for battle-weary tennis stars after a punishing season. Russian Olympic gold-winning tennis star Elena Vesnina also enjoyed a visit to the golden beaches of Seychelles recently, while French tennis player Jeremy Chardy met with aspiring young Seychellois players while on holiday in the island nation.

Tipsarevic, 32, was formerly ranked eighth in the world in April 2012 by the Association of Tennis Professionals -- the highest of his career -- until badly injuring his foot which required two successive surgeries in 2014. Although he did return to the tennis court last year, he has fallen to 145th place in the world male singles rankings.

He and his wife, Biljana, who is a Serbian fashion designer, have been married since 2010 and welcomed daughter Emili to the world in January 2014.

Their tennis off-season holiday to Seychelles was obviously a chance to escape the pressures of tennis, fashion and life in general, and the two lovebirds enjoyed the sunshine and the beach, posing for plenty of pictures atop Silhouette’s beautiful granite beach boulders.

Biljana commented on the beauty of the bright green Seychelles giant green gecko, while her husband made friends with a pretty ground dove, which came into their villa looking for crumbs.

The couple stopped in Dubai for a mini-vacation before returning home to Belgrade to get back to their daughter and dog Dino.