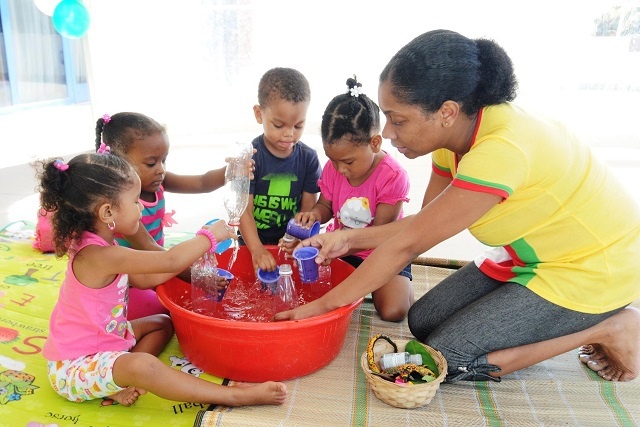 The Institute of early Childhood Development produced a booklet in 2014 which highlights some of the Seychellois children's thoughts and feelings about where and how they would like to see Seychelles in 2020 and beyond (Joena Bonnelame, Seychelles News Agency)

(Seychelles News Agency) - The recognition of Seychelles as a world leader in best practices in Early Childhood Care and Education (ECCE) is the result of good programming and hard work in the education sector, said a top official of the local Institute of Early Childhood Development (IECD).

Shirley Choppy, the executive officer of the IECD, told SNA that this result relates to the fact that the institute is doing a great job of nurturing and ensuring strong development in children.

“We at IECD have contributed immensely in terms of programming and education. We have developed a comprehensive structure for child minding to ensure consistency across all establishments,” said Choppy.

Seychelles, a group of 115 islands in the western Indian Ocean, has been recognised by the International Bureau of Education (IBE) of UNESCO for its leading role among the ‘General Education Quality Assessment Framework’ (GEQAF) countries. These also include Botswana, Egypt, Gabon, India, Oman, Saudi Arabia, South Africa, Swaziland and Azerbaijan.

The island nation recently signed an agreement with the IBE-UNESCO through which Seychelles will share its expertise with other countries in the setting up of their ECCE structure.

At the opening of the conference, the director general of UNESCO, Irina Bokova, said, “Since 2010, Seychelles, a best practice champion, has worked all out to increase and enhance ECCE to share for the benefit of all, notably through South-South collaboration and working with the IBE-UNESCO.”

Vice-President Vincent Meriton spoke on the importance of ECCE and roles played by different stakeholders in the development of the children and the important work done by President Danny Faure, the former chair of the local ECCE.

“Believing that early education is the solid foundation that sets up a society, Faure’s commitment to the development of our children has been apparent, while addressing the first Unesco World Conference held in Moscow in 2010,” Meriton Said.

At the Moscow Conference, Faure pledged his and Seychelles support to implement the Moscow Framework for Action and Cooperation which the delegates adopted. The Moscow Framework calls upon all member countries to adopt a broad and holistic approach to Early Childhood Care and Education for all children between 0 to 8 years of age.

This was followed by a national framework on ECCE in 2011 and the setting up of the Institute of Early Childhood Development 2012 said the vice-president.

The director of IBE-UNESCO Mmantsetsa Marope said that at the last ECCE conference in 2015, she called on Seychelles to transform this institutionalised event into an international biennial.

“As would be expected, it (Seychelles) stepped up to affirm its leadership. This is a milestone achievement for ECCE development and a proud moment for Seychelles. We call on other countries to follow their lead: to develop resilient ECCE systems to give each and every child a fair chance at holistic development,” said Marope.

A plaque was handed over during the conference by Marope to Choppy and Mondon, recognizing Seychelles, as the best practice hub for early child care and education.

Marope added that Seychelles is on a decisive and comprehensive route to build up more resilience in its ECCE system and said that “we have the same power to make a difference.”

She said that ECCE services are poor even in rich countries as there is a lack of know-how on the way to use the system.

Although it is a small island state, Marope brings to the forth that Seychelles is providing example that will help other countries to establish their ECCE system.

“Be it financially or intellectually, Seychelles should be proud for the amount of work they are doing,” Marope said.

Seychelles has made a voluntary contribution of $30,0000 to the IBE to help them in their various functions.