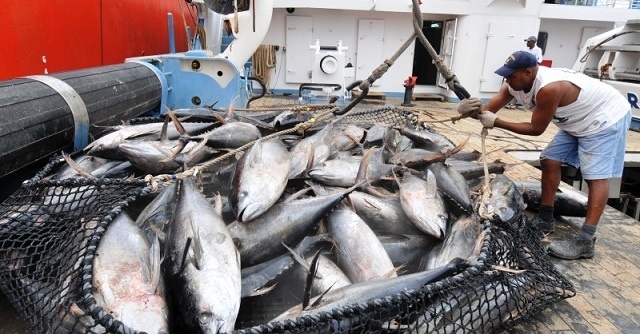 The decision to reduce fishing allowances of yellowfin tuna by 15 percent was taken by the IOTC in June last year. (Seychelles Nation)

(Seychelles News Agency) - A group representing a large majority of Spanish tuna purse seiners operating under the Seychelles’ flag has given their reactions on the temporary measures that the island nation has taken to reduce the catch of yellowfin tuna by 15 percent, in a press communiqué.

Seychelles, an archipelago in the western Indian Ocean has yet to implement the IOTC resolution. The Ministry for Fisheries and Agriculture along with the Seychelles Fishing Authority (SFA) and other stakeholders have been meeting regularly and a request has been made to the IOTC to allow Seychelles to use 2015 as the reference year, as there were more vessels in 2015.

In the last meeting, Seychelles announced the measures it will take in the near future which are intended to reduce levels of effort by support vessels by 20 percent. The calculations were made using data from the IOTC sent to the Ministry of Fisheries for review.

The Spanish producers organisations of tuna freezer vessels (OPAGAC & ANABAC) said in its communiqué that, “According to our estimates, this measure will yield a 3 percent reduction in the catches of yellowfin tuna during 2017, which we consider insufficient.”

The group is proposing instead of only support vessels, purse seiners are also included and that the effort levels are reduced by 10 percent.

“We believe that this approach, taking into account the trend in catches presented by the SFA, and other measures adopted by the IOTC, may assist the Seychelles in maintaining catches for the purse seine fleet below the agreed limits. Also, this measure is potentially 4-times more effective than the sole reduction of effort for support vessels,” the communiqué said.

The producers organisations said the fleet it represents is seriously committed to sustainable fishing practices and the long term utilization of natural resources.

“For this reason, we look forward to work hand in hand with the Seychelles Government and other stakeholders to ensure the sustainable use of the tuna stocks in the Indian Ocean. We are grateful to the Government of Seychelles for the process of consultation it has initiated and would like to renew our commitment to keep the dialogue up into the future.”