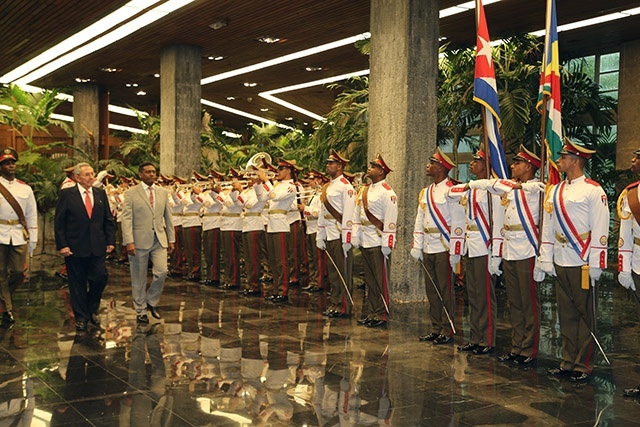 President Faure inspecting the Guard of Honour in the presence of President Castro. (State House)

(Seychelles News Agency) - The Seychelles’ President Danny Faure met with his Cuban counterpart Raul Castro on Thursday at the Presidential Palace in the Caribbean nation.

Among the subjects discussed were the specialisation programmes of the 15 Seychellois students currently studying in Cuba, a communiqué from State House said on Friday.

Following the request of President Faure, the Cuban President has agreed that the 15 students can pursue their specialisation programmes immediately after graduating from their respective medical schools, with no interruption in their studies.

The Seychelles’ head of state said, "This will allow Seychelles to be better endowed with much needed specialist doctors in a shorter time frame, and allow us to better plan for our future needs in the medical sector."

Faure took the opportunity to express his appreciation to Castro for the support received from Cuba over the past three decades by sending doctors and specialists to Seychelles, a group of 115 islands in the western Indian Ocean.

There are 51 Cuban doctors and specialists working in Seychelles. "They are providing the highest quality of healthcare to our people. They have integrated easily in our communities and have earned the respect of our people," said Faure.

He added that: "We now look to the support of Cuba in the implementation of a comprehensive programme for the treatment of diabetes, cancer, as well as increasing vaccination as part of our early childhood immunisation initiative."

Health is one of the main areas of cooperation between the two countries since the establishment of bilateral relations in 1978. Last year, Seychelles and Cuba renewed their bilateral cooperation agreement in the health sector to bring Cuban medical health professionals to work in the island nation for two years.

Under the agreement, Cuba will provide various health programmes including primary, secondary and tertiary health care, prevention and control of communicable diseases and promoting healthy living.

The two presidents also discussed issues of mutual interest on the international scene. Cuba and Seychelles share common values and aspirations in their common quest to advance the ideals of peace, understanding and respect among nations. These include respect for principles of international law, respect for the sovereignty and independence of nations as well as espousing the values of solidarity among peoples.

The opening of the Seychelles Embassy in Havana on Wednesday will provide the appropriate platform for the expansion of the scope of ties of friendship and cooperation between the two countries. These already exist in the fields of sports, agriculture and the environment.

As part of the program for his state visit in Cuba, Faure laid a wreath to honour Cuban National Hero, Jose Martí, at the Memorial Monument in the Revolution Square.

Faure also held talks with the Cuban Parliament President Esteban Lazo, with whom he reiterated the gratitude of the government and people of Seychelles for Cuba's contribution to the development of the island nation.