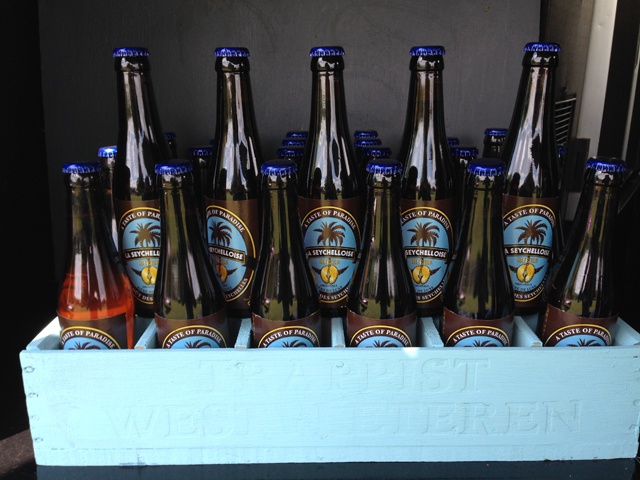 (Seychelles News Agency) - Often, when people of two different nationalities marry, the product of the union shows the characteristics of both parents’ nationalities and characters. The same can be said of the produce of a Belgian national who, after marrying a Seychelloise woman and travelling often to the Indian Ocean islands with his wife, decided that the fruit of their union would be a beer that combined elements from both countries.

Thus, La Seychelloise beer was conceived and born – a beer brewed in the traditional, artisanal Belgian way passed down for centuries and made from hops grown in the Belgian town of Poperinge, but balanced out with uniquely Seychellois ingredients, such as ginger and nutmeg.

The result is an amber beer with a unique blend of bitter hops and sweet tropical spices, topped off with a creamy head of foam.

The inventor of the artisanal masterpiece is Ray Serste and the beer is produced together with a Belgian master brewer in the province of Brabant Wallon. Ray Serste’s idea was to promote friendship between people and promote the two countries to each other.

“The Belgian know-how is recognized worldwide… and we used tropical spices from Seychelles to give it a unique taste. What is better than a good beer to create a friendship?” said Serste in an email interview with SNA.

La Seychelloise beer is the product of six months of development and Serste explains why artisanal beer has a great appeal to beer connoisseurs and is not intended to compete with more commercial mass-produced beers.

“La Seychelloise is brewed by hand in the great tradition of the abbeys that exists since the 14th century,” he said. “The brewing process is completely natural, without additives. And it has a secondary fermentation in the bottle.”

Serste adds that the beer should be savoured like a fine wine, and due to the secondary fermentation process in the bottle, will have a different taste at different ages, similar to the maturing properties of wine.

In Belgium, Serste says the beer has been a huge hit at artisanal beer and other festivals, and has drawn a crowd curious about the large coco de mer on display, covered in 24-carat gold leaf.

“The Belgians are surprised by its spicy taste of ginger, nutmeg and some secret ingredients,” he adds. “We call it a taste of paradise – an exceptional beer for an exceptional island.”

Aside of the beer Belgian beer enthusiasts can also buy a unique coco-de-mer beer mug, handmade by a local family-run pottery.

The coco-de-mer, the biggest seed in the world grows on the Seychelles second most populated island of Praslin in its UNESCO world heritage site of Vallee de Mai.

Although the beer, which has an alcohol content of 8% and comes in 330ml bottles, is only available thus far in Belgium, Serste is making arrangements to export his product to Seychelles in the near future, he is not yet sure how much it will retail for here.

“We really do not want to compete with the local beer, La Seychelloise is an artisanal beer,” Serste told SNA.

Seychelles Breweries Limited is the sole brewery in the Indian Ocean archipelago producing a wide range of non – alcoholic and alcoholic beverages including Seychelles’ favourite brand of beer, Seybrew, recently made available in cans.

According to the recently-released WHO’s Global Status Report on Alcohol and Health 2014, which measured average alcohol consumption in countries throughout the world between 2010 and 2011, litres of pure alcohol consumed by Seychellois per year dropped to 5.6 litres per capita from a whopping 10.6 litres per capita recorded in the 2011 report, which contained data from 2003 to 2005.

Some years ago, Seychelles was ranked as one of the biggest beer drinking countries in the world. According to data from the 2011 World Health Organization’s Global status report on alcohol and health Seychelles was considered the third highest consumer of beer per capita in the world.