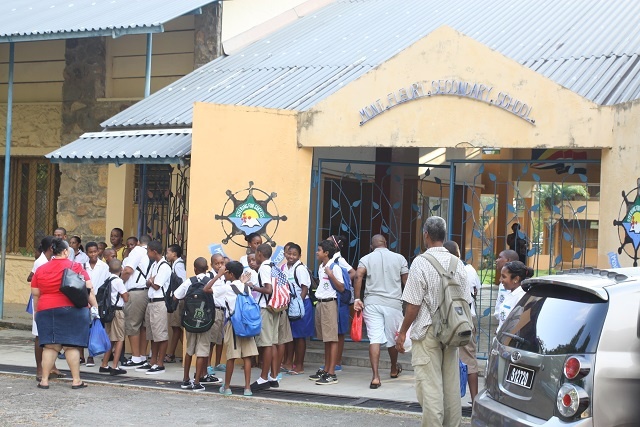 The Olivier Maradan school is for all Seychellois, Christian or non-Christian, and will focus on moral and spiritual values and above all strict discipline. ( Joe Laurence)

(Seychelles News Agency) - Discipline -- good behaviour from both students and parents -- will be the enforced expectation at the Catholic Church's new Olivier Maradan School, which will be operational in Seychelles by 2020, school leaders say.

“The opening of the new school will present all our children the chance to be better prepared for the future of the country,” said Father Pierre Madiela from the Ste Therese church in the central Mahe district of Plaisance.

Madiela, who along with a group of faithful is behind the opening of the new school, said that discipline will be emphasised.

“This school is for all Seychellois, Christian or non-Christian, and will focus on moral and spiritual values and above all strict discipline. No one, be it students or parents, will be tolerated for being disorderly,” he said.

The educational institution will be built at Ile Aurore, a man-made island, in the north of the main island Mahe, where a plot of land has already been allocated. It will be the first Roman Catholic school in modern days and will complement what is already being offered by state and private institutions.

Madiela explained that the institution is hoping to use locals for teaching, adding that they will not be poaching teachers in either state or private schools.

“We have a lot of good instructors out there, teachers who are retired but who have approached us, who are willing and are still able to contribute to the educational development of our children,” Madiela said.

Additional teachers, mainly missionaries, will be brought in the country and housed at the school which will also have teachers quarters. There are also plans to construct a building, behind the Ste Therese church to accommodate more teaching staff.

English will be the main medium for teaching, but an emphasis will also be put on the other two national languages -- French and Creole.

William Zarine, a consultant for the project, said subjects such as the languages, maths and the sciences will be the core of the curriculum and the school’s programme will also be oriented towards the world of work.

“Our economy is one driven by fisheries, tourism, finance, business and agriculture, so we will emphasise subjects related to finance and business,” said Zarine.

He added that subjects like tourism, agriculture and fisheries are already covered to some extent in geography lessons, but the school will be putting more emphasis.

“In the plan for the school, we have made provisions for a garden as well, so that students at an early age can get exposed to gardening and agriculture,” Zarine said.

The school’s curriculum there will also be vocational training, and Zarine said that “carpentry and masonry will be part of learning even though these will be optional rather than compulsory programmes and will be held as extracurricular activities.”

The consultant who also has vast experience in the finance and banking sector said, “It is important as well to develop in kids at an early the idea of entrepreneurship, having your own business. And why not if we can introduce ICT (Information and Communications Technology) at crèche level.”

The Roman Catholic Church was behind the establishment and management of most schools in the Seychelles, an archipelago in the west of the Indian Ocean, from the 1850s. Well, known schools at that time included St. Agnes, Dominic Savio, St. John Bosco and the Regina Mundi Schools.

The education system in Seychelles changed in the early 1980s following a comprehensive review after which education became free and compulsory and children had to attend schools in their districts.