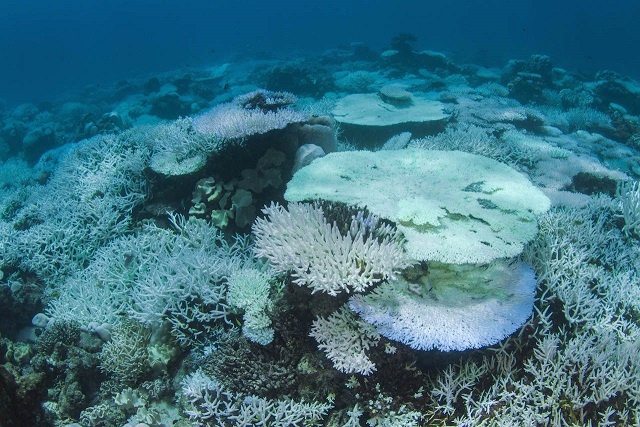 (Seychelles News Agency) - With a vast Exclusive Economic Zone of 1.37 million square kilometres, many of the inhabitants of Seychelles look to the sea for sustenance.

One of the important sea shelters for marine life are coral reefs, so protecting them is vital for the island nation of 93,000 inhabitants. With the growing adverse impact of human activities and climate change, Seychelles’ marine resources remain under threat, especially the coral reefs, which is why some organisations and establishments have come up with initiatives to restore them.

The below are four of the main coral reef restoration projects.

The coral restoration project of this organisation began in 2010 with the financial support of United States Agency for International Development (USAID). The project is the largest coral reef restoration program in the region, using more than 50,000 coral fragments which were grown in underwater nurseries for more than a year, off Praslin Island.

Choosing the coral fragments that had survived the destructive effects of the disruptive weather patterns brought about by El Niño  phenomenon in 1998, a group of marine ecologists embarked on creating an underwater nursery where nine different types of juvenile corals were planted and raised on ropes for almost a year, known as ‘the coral gardening’ method.

The long-term “success” of this mass transplantation is yet to be monitored but the project has already had a very positive knowledge-building impact.

The project began in March 2015 and aims at restoring 10,000 square metres of coral reef in Petite Anse bay, where the resort is located. The project is organised in close partnership with WiseOceans, a marine conservation and education company that works for healthier oceans.

The resort has made the coral reef rescue an interactive one with a mixture of romance and conservation. Called ‘Love grows beautiful things,’ newlywed couples celebrating an anniversary, or simply those on a romantic escape together at the resort, are given the opportunity to contribute to the ongoing reef restoration project.

Guests help prepare a rescued coral fragment for attachment to a heart-shaped metal frame (that will help sustain the growth of their coral) before it is planted into the coral nursery for a full recovery and eventual transplantation back to the reef. Under the expert guidance of Georgina Beresford, the WiseOceans Reef Restoration Project Officer, couples may also take to the water with WiseOceans to watch the planting of their fragment in the coral nursery, before a guided snorkel of the bay,

Created in partnership with the Marine Conservation Society Seychelles, the interactive programme guided by marine experts helps guest discover a treasure trove of marine life around the island through a curated snorkelling experience.  Through the programme, guests can also experience an underwater art gallery or send an underwater postcard to friends and family.

Entitled, ‘Unlock the Sea,’ the programme is aimed at restoring the coral reef in the north-western coast of Mahe, the nation's main island. The project which is in its second phase is going to focus on the construction of nurseries outside the corals' natural environment. The process is expected to take between six to 12 months depending upon the size and the species of corals.

In the restoration process, coral fragments or pieces of coral broken by storms, snorkelers, divers or anchoring boats are used as ‘corals of opportunity’. They are carefully collected and nurtured in coral nurseries in its natural population that have been set up exclusively for this purpose.

This programme was founded in 2015 by the Cerf Island Conservation Programme and aims at rehabilitating the coral reef around the Cerf Island, located some 1.3km away from the main island Mahe. Cerf is one of five islands found in the St Anne Marine Park and it is home to at least three tourism establishments.

In a bid to maintain healthy reefs around the island, one of the ongoing projects of the Cerf Island Conservation Program is restoring the reefs using over 400 coral fragments rescued from the seabed following past and current bleaching events.

The programme is also getting the support of the private sectors and the Seychelles’ National Park Authority. Throughout the project, nurseries have been created out of ropes and pipes where the corals are reared for rehabilitation. Also, metal frames have been placed along the shallow reefs filled with resilient corals.