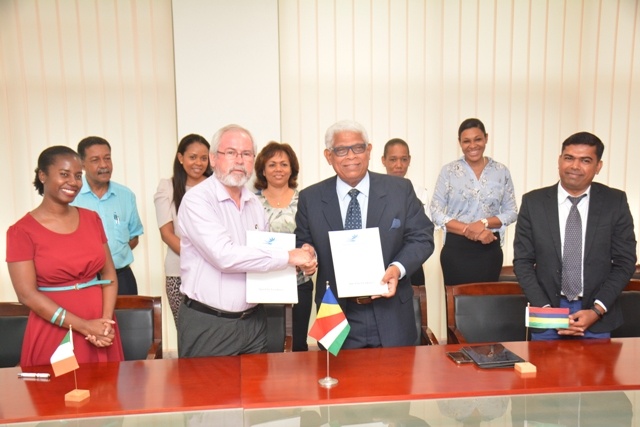 The MOU was signed on Tuesday between the Seychelles Tourism Academy, the Constance Hospitality Centre and the Shannon College of Hotel Management. (Thomas Meriton)

(Seychelles News Agency) - More Seychellois students studying the tourism sector will benefit from training and placements in Mauritius and Ireland with a renewed agreement between three institutions.

A memorandum of understanding (MOU) was signed Tuesday between the Seychelles Tourism Academy, the Constance Hospitality Centre and the Shannon College of Hotel Management. The signing to renew the MOU was held at the Ministry of Tourism, Civil Aviation, Ports, and Marine.

Claude Narain, general manager of the Constance Hospitality Training Centre, said that the signing “marks 10 years of partnership between the centre and the Seychelles academy. It will bring closer collaboration between us.”

“We are bonding ourselves to the Seychelles Tourism Academy, which will ensure the placement of more Seychellois students in Constance resorts in Mauritius,” said Narain, who 10 years ago signed the first agreement.

Narain said, “Constance Hospitality Training Centre will always stand next to the academy. We are showing our commitment that we have through this new agreement. I am sure in 10 years’ time we will again reconvene to sign another agreement.”

Constance Hospitality Training Centre was founded in June 1998 to recruit and train team members of Constance hotels.  During the subsequent years, it has become internationally recognised and won several awards both at national and international level.

The renewed Memorandum of Understanding is the fourth signed with the Seychelles Tourism Academy. This time the agreement, comprised a third party, the Shannon College of Hotel Management.

Seychelles, an archipelago in the western Indian Ocean, first signed a collaborative agreement with the institution – a recognised college of the National University of Ireland -- in June 2015.

The Seychelles Tourism Academy’s faculty of hospitality management received international recognition in becoming a recognised Academy of the Shannon College of Hotel Management.

The renewed agreement will now cover exchange programmes of both staff and students between these three institutions. Shannon College sends their students on internship all over the world, including to Seychelles.  With this new partnership, they will now be able to send their students on an internship to Mauritius in Constance Hotels.

Flavien Joubert the Principal of the Seychelles Tourism Academy said that “the agreement will provide Seychellois students more options to further develop themselves in the tourism industry.”

Joubert said that “last year five students were awarded by President Faure for their good performances. These five awardees will be offered a scholarship for a six months internship in Mauritius next year.”

The minister for tourism, civil aviation, ports, and marine, Maurice Lousteau Lalanne, said that the government has invested a lot in bringing the tourism academy to where it is today compared to 10 years ago.

“I want to affirm the commitment of the government to continue to invest in the Seychelles Tourism Academy to ensure that we improve the standard of excellence in service in Seychelles and for this, we need such partners,” said Lousteau-Lalanne.

During the last 10 years over 60 students benefited from internships at the Constance Hospitality Training Centre. These covered areas in food production, restaurant, and bar, wellness, and spa as well as for reception and housekeeping. These placements varied between two, three to six months.

Apart from students, around 30 lecturers from the Seychelles Tourism Academy have also been to Mauritius for training.