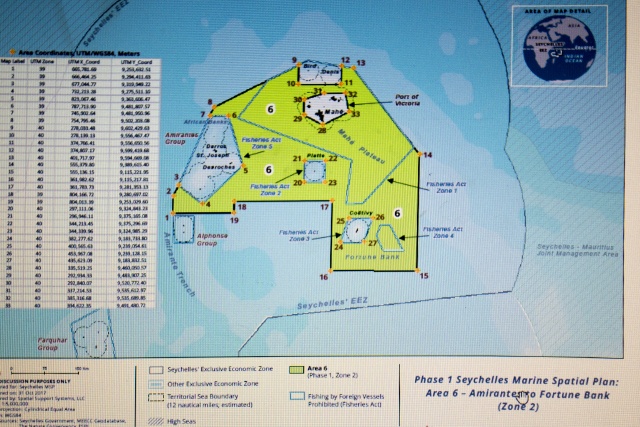 (Seychelles News Agency) - Seychelles on Wednesday announced an area of ocean the size of Great Britain that will be newly protected from overfishing, pollution, and unplanned development to guard against climate change while not slowing economic progress.

American actor and environmental activist Leonardo DiCaprio was among those involved in the development.

“The two new areas for protection and management together cover a total area of just over 200,000 square kilometres or 16 percent of Seychelles Exclusive Economic Zone,” said Didier Dogley, the Minister for Environment, Energy and Climate Change.

The second covers 136,000 square kilometers of a commercially important stretch of ocean between the Amirantes group of coral islands and Fortune Bank.

The Marine Protected Areas are the first milestones in a six-year process that will end in 2020 with 30 percent of Seychelles' ocean safeguarded, as part of a new comprehensive Marine Spatial Plan for all of the country's waters.

"We realised that as small islands and more importantly as large ocean nations, we share many features and face common challenges with other nations," said President Danny Faure.

"Our large ocean brings development opportunities but also responsibility. With an Exclusive Economic Zone of 1.37 million square kilometres, the second-largest in Africa, our ocean is central to our development and for the future of generations to come,” said Faure.

Seychelles’ president said that “by planning properly to protect our environment, we can be sure we are also protecting our people and their livelihoods against an uncertain future. I'm very happy to celebrate today's important milestones in the development of the first marine spatial plan for tropical oceans."

The area, which is critically important to endangered marine life and a $300 million-a-year fishing industry, has been protected to better prepare it for climate change.

It was created as part of a groundbreaking conservation finance deal in 2016 designed by The Nature Conservancy (TNC) and funded by public and private donors including the Leonardo DiCaprio Foundation.  The deal was the first such 'debt conversion' designed to protect marine environments.

"These protections mean that all species living in these waters or migrating through them are now far better shielded from overfishing, pollution, and climate change,” he added.

Tercek added that: "This is a critical accomplishment in our mission to bring conservation to scale across the globe; what you see today in Seychelles is what we expect to introduce in the Caribbean and other ocean regions facing the threats of climate change."

Two further phases of zoning, concentrating on both shallower inshore or ‘territorial sea' waters and remaining deep ocean areas, are due to be completed by the end of 2018.

With close to one-third of Seychelles’ ocean area strongly safeguarded, only very limited activities including research and closely regulated tourism are allowed under strict conditions to conserve the ecosystem in the face of climate change uncertainties.

By demarcating large areas to be both protected and properly managed, Seychelles, an archipelago in the western Indian Ocean, is now better prepared for the unknown effects of warming and rising waters, ocean acidification, and increased and illegal fishing.

Without these Marine Protected Areas, activities like oil and gas exploration, deep-sea mining, dredging, and controversial fishing techniques, could take place in one of the planet’s most pristine, biodiverse oceans with little or no restriction or direction.

Critical to the success and completion of this deal was creating the Marine Spatial Plan. The plan covers all 1.37 million square kilometres of Seychelles’ Exclusive Economic Zone and Territorial Sea. It is the second-largest area of ocean in the world to be covered by such a plan, after one in Norway, and the first marine plan designed to address climate change and sustain a national 'Blue Economy'.