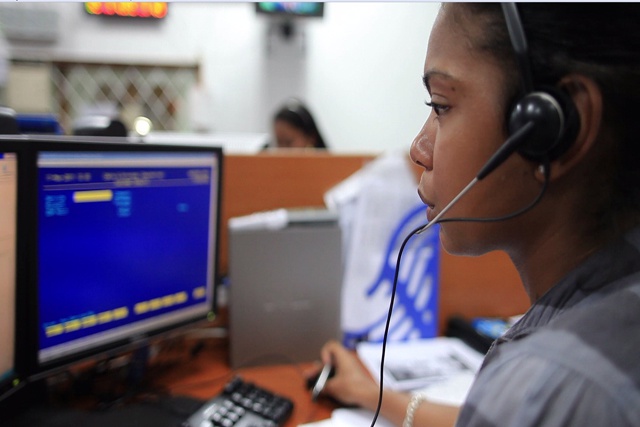 Office worker in Seychelles. Seychelles is fourth in Africa for e-government according to the 2014 UN e-government survey, down from its first position in 2012 (Seychelles News Agency)

(Seychelles News Agency) - Heads of public service and e-government units from eighteen African Commonwealth countries are gathering in Mauritius for a Commonwealth meeting that is expected to focus on improving development in Africa through e-government initiatives.

According to a Commonwealth press statement, the 11th Forum of Commonwealth Africa Heads of Public Service, taking place in Port Louis, Mauritius, was opened on Tuesday by Mauritian President Rajkeswur Purryag under the theme ‘e-Government for Inclusive and Sustainable Development in Africa’.

The forum which end today is an annual event since 2004, bringing together heads of public service to discuss best practices on relevant issues in public sector management and service delivery.

Seychelles overtaken in e-gov by other African countries

Seychelles, which came first in Africa for e-government in 2012, has now fallen into 4th place behind Tunisia, Mauritius and Egypt in the 2014 UN e-government survey. Seychelles did however improve its overall global ranking, climbing up three places from 84th to 81st.

Progress in Africa as a whole remains relatively slow and uneven. The regional e-government development index (EGDI) average in Africa is 0.2661. Six countries (Tunisia, Mauritius, Egypt, Seychelles, Morocco and South Africa) have EGDI values above the world average of 0.4712, placing them among the top 50% in the world. On the other hand, about 30% (16 countries) of the 54 African countries surveyed are at the bottom 10% of the world ranking.

Still ‘moving in the right direction’

The Seychelles Principal Secretary of the Department of Information Communications Technology (DICT), Benjamin Choppy, who is representing the islands’ Secretary of State for Cabinet Affairs, Mohammed Afif, at the forum, said in an email interview with SNA that as Seychelles has actually moved up three places in the world ranking, the country’s e-government plan was “still going in the right direction”.

However, he said, other countries in Africa (Tunisia, Mauritius and Egypt) had made greater progress still and moved up the global rankings by larger amounts.

“Looking at the breakdown of the overall EGDI index, we find that we are still have higher scores for telecoms infrastructure and human development,” said Choppy. “The three countries though have scored higher than us on the Online Services Index (OSI). This is what has allowed them to move ahead of us.”

Choppy says that even though Seychelles has done well in this aspect, what has caused the country to lag behind overall is the sheer number of online e-government services that other countries have initiated in comparison to Seychelles and the relative lack of e-participation initiatives to tackle transparency issues and open data access.

“From the DICT perspective, it is clear that the strategy of an Integrated whole of Government approach (which involves a high level of consolidation and centralization), which we had been following for implementation is sound and in the right direction,” said Choppy.

“However, in order for us to do better in terms of the ranking we need to increase the number of online Government e-services further and also have those that addresses e-participation.”

Choppy warns that more resources are needed, both financial and human, to catch up with our top three counterparts in Africa. This, he says will also depend on how fast the line ministries and agencies will be able to re-engineer and operationalize their business processes to cater for online transactions.

Seychelles’ government portal, which is focused on government services and information, is not without its own problems. Choppy acknowledges that some links to some government websites might not be working and some information is not up-to-date, however he says DICT is totally dependent on the ministries and other organizations to keep their sites updated.

“Collaboratively better processes and mechanisms need to be put in place to ensure that updating of this information is more effective,” he cautioned, although he did note that there were some organizations which made significant efforts to ensure that their sites were properly updated.

“DICT will not be able to comment at this point as to why their website content might not be up to date or why some might not have a website, but will need to sensitize them more in relation to the need to continuously update the content of their websites,” he said. “DICT does provide the infrastructure for the ministries to host their websites - if they choose to - and also makes available a set of guidelines and standards to guide government website formulation.”

The Secretary of State for Cabinet Affairs, Mohammed Afif has echoed Choppy’s sentiments, saying that the Seychelles government has worked hard to place due emphasis on ICT development in Seychelles, and he adds that educational institutions have an important role to play in HR capacity development in this field.

“We have reached a point in my view where our technical capacity as a country will be challenged by the financial resources to implement certain projects, such as biometric ID cards, biometric passports; but these are not insurmountable challenges. We just need to keep our resource priorities in perspective,” he said.

The next two years

Choppy has said that DICT will continue to populate the e-service gateway with as many e-services as possible and a revamp of the government portal itself is also planned for the near future to improve both the design and the functionality of the user interface in a way that is easier for the public to locate and use information.

The main focus, Choppy said, will be on increasing the number and types of online e-services and m-services (mobile applications) that can be delivered electronically to citizens and businesses.

“Given that we have completed the interfacing of various electronic payment solutions to the e-government platform, an e-payment facility will also be incorporated progressively in the e-services that require it,” he explained. “Similarly, this will apply for electronic/digital signing where required as part of e-services.”

The principal secretary has revealed that in terms of specific e-services planned for development and release in the near future, planning application processing is currently in the testing and piloting phase with the Planning Authority.Online business license renewal processing is also being developed as an e-service and an electronic document repository is also expected to be in use soon among government officials.

In the last two years Mauritius has put significant effort into increasing their e-government capabilities by developing their online portal and telecommunications infrastructure. The website www.gov.mu offers citizens an exhaustive list of e-services, including an online payment facility for services offered by the state.

The Mauritian government also recently launched its Mauritius Trade Easy portal to facilitate trade for the small island developing nation. The portal provides detailed and up-to-date information on imports and exports as well as additional market opportunities for traders both within Mauritius and from other countries.

“E-government increases transparency by providing access to information and delivering government services round the clock through digital means. It also increases government efficiency and effectiveness by modernising and streamlining processes,” he said.

The acting Director of the Commonwealth Secretariat, Tim Newman, described the forum as a “significant meeting” given the strategic role that heads of public service play in delivering more efficient citizen-focused public services.

“E-government provides flexible and multi-faceted solutions to a wide range of public service delivery challenges,” he said. “The transformational effect of e-government, most often based around mobile technology, in areas such as banking, health and political participation is already evident across much of Africa.”

RI) 2014, which assesses 148 countries based on their capacities in the information and communication technology (ICT) sectors.

Seychelles, with a population of 90,000 people, moved from position 79 in 2013 to 66 in 2014, in the index prepared by the nonprofit international organization based in Switzerland.

According to the 2013 edition of "Measuring Information Society" (MIS) Report which is published annually by the International Telecommunication Union (ITU), in Geneva, Switzerland, Seychelles was ranked 64th out of 157 countries for the Information and Communications Technology Development Index.