Has the number of Seychellois children not attending school increased? 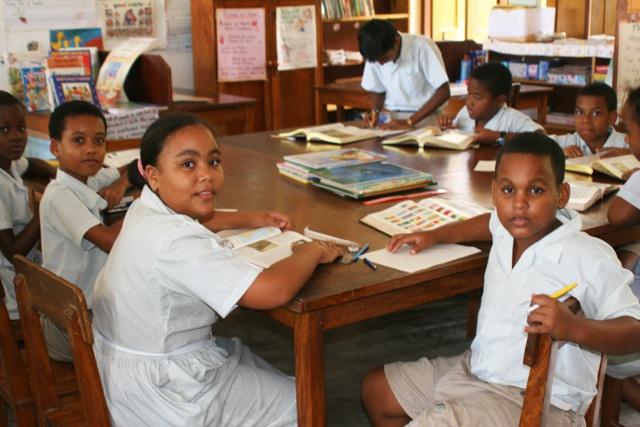 Primary students in class at Grand Anse Primary school on Praslin, in 2010. A system of free education came into effect since 1981, which introduced free compulsory education up to the age of 16 and free elective education until the age of 18 (Seychelles News Agency)

(Seychelles News Agency) - The number of Seychellois children not attending school has increased from 5.4 percent in 2007 to 6.1 percent in 2011 according to a new report by the United Nations Educational, Scientific and Cultural Organization (UNESCO) published recently.

The gender gap is skewed slightly in favour of girls; 95.4 percent of primary-aged girls are in school compared to 92.1 percent of boys, according to the report, which uses data from the UNESCO Institute for Statistics (UIS), mostly gathered in 2009 and 2011.

The UIS collects education data for more than 200 countries and territories through an annual survey as well as partnerships with organizations such as the OECD and Eurostat.

Seychelles’ 1979 statistics showed that the number of children not attending school was high, at around 19 percent. Some older generations of Seychellois received little to no formal education during their youth, but a government drive in the late 1980s to improve adult literacy improved the overall literacy rate, which now stands at over 97 percent of the island nation’s population of over 90,000.

In the modern Seychelles, a system of free education came into effect since 1981, which introduced free compulsory education up to the age of 16 and free elective education until the age of 18.

The Seychelles Ministry of Education through itsPolicy Planning and Research Division has described the latest figures as misleading saying it does not represent the real situation, and should be interpreted with caution.

Speaking to SNA the Director of the division’s Education Management Information System (EMIS), Wilfred Uranie said “the 5.4 percent rate for 2007 which represents 472 students and the 2011 rate of 6.1 percent which represents 500 students would mean that on average 20 primary students from each primary school in the country, who were supposed to be in school, did not attend school, which is not the case.”

Uranie says the Ministry of Education is supposed to supply statistical figures to the UNESCO Institute for Statistics (UIS) on a yearly basis which is used to calculate the out-of-school children, adding that at times UIS makes certain estimates based on projected population figures or past trends of respective countries, when the figures for particular countries are submitted late or are not available to UIS.

With regards to how the drop-out figure should be calculated Uranie said there is a need to trace the primary students’ population back to when they started.

“For example if you are calculating dropouts for primary 6 Cohort of 2014 you need to calculate for each year level. For example look at the current primary 6 cohort back to when they started in primary 1. Hence, you will have the drop-out figure for that cohort for each given school year. So if now in primary 6 you have 90 students and back in primary 1 they started as a group of 100, then in a nutshell the difference of 10 is the dropout figure,” Uranie gave as an example.

Nevertheless, he emphasized that normally the dropout figure might represent students that have either moved from state schools to private schools or vice versa or where there is migration or death, which is sometimes not recorded.

The EMIS Director noted that the Seychelles Ministry of Education has quite an effective system in place that identifies, traces and reports as to when students are being absent from school after three days on the onset and for longer periods.

“I wouldn’t say there isn’t one or two cases where students are supposed to be in primary but are not, we may have one or two which for one reason or another may not be in school at the moment. When we have such cases, though, we have the Students’ Welfare Unit, at Headquarter’s level that helps to deal with cases of long period of absence.”

Across the world, 58 million children aged six to eleven are still failing to learn basic literacy and numeracy skills, simply because they are not in school.

According to the data in the report, 43 percent of all out-of-school children of primary school age will probably never see the inside of a classroom, 23 percent started school but dropped out early, and another 34 percent are expected to start school later than normal.

Eritrea is ranked as the country having the highest number of out-of-school children in the world – a whopping 67 percent of its country’s children are not enrolled in school.

Japan has the lowest rate in the world with only 0.1 percent of children of school-going age not receiving a formal education.

As debate rages over what the goals of the post-2015 development agenda should be, UNESCO Director-General Irina Bokova has said in a statement that the world has already failed to fulfil one of its most basic commitments in the Millennium Development Goals – to get every child in school by 2015.

“Combined with UNESCO's recent news that aid to education has fallen yet again, the lack of progress in reducing out of school numbers confirms our fears – there is no chance whatsoever that countries will reach the goal of universal primary education by 2015,” she said.

“As we advance towards 2015 and set a new agenda to follow, all governments must invest in education as an accelerator of inclusive development. This Report’s evidence clearly shows that education provides sustainability to progress against all development goals. Educate mothers, and you empower women and save children’s lives. Educate communities, and you transform societies and grow economies.”

A good example in Africa

Seychelles is the only country in Africa that has thus far already fully achieved education for all, in line with the six Education For All (EFA) goals set out by UNESCO for attainment in 2015.

There are 33 public schools and three private schools in the archipelago and Seychelles also began to offer domestic tertiary education following the establishment of the University of Seychelles in September 2009.

This year, three Seychellois students emerged amongst the ten best worldwide in their respective secondary-school level Cambridge International Examinations which they sat for in 2013.

Seychelles recently took a $ 10 million loan from the Kuwait Fund for Arab Economic Development for two education-related projects in the education sector; one being the construction of the new La Rosiere primary school in the capital city, Victoria, and the other a new Agricultural Training Centre in the South of the main island of Mahé.

General » Be a reporter: Write and send your article » Subscribe for news alert
Tags: UNESCO, education, out of school