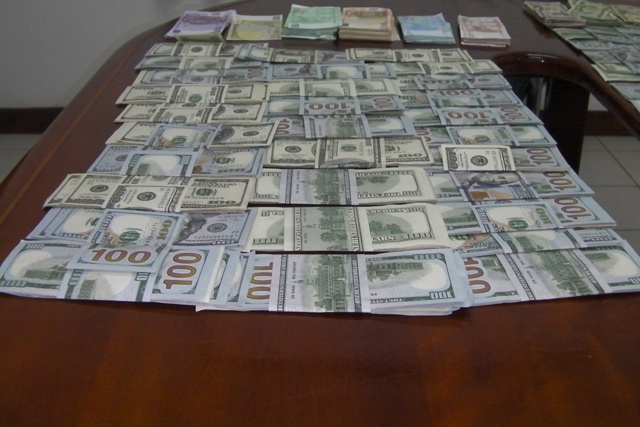 Money in foreign currencies seized by NDEA agents at the Seychelles International Airport in 2014. (NDEA)

(Seychelles News Agency) - A proposed law to counter money laundering in Seychelles will be presented to the National Assembly early next year.

The director of the Financial Investigation Unit (FIU), Philip Moustache, announced the bill last week at State House. The bill has already been approved by the Cabinet of Ministers.

Moustache said that when the anti-money laundering bill comes into law people will need to “show proof of where they get money for huge transactions such as purchasing a new car, boat, land or shares in companies.”

The new law will make it mandatory for all transactions valued above $14,000 (SCR20, 000) to go through the banking system. Institutions like the Seychelles Licensing Authority (SLA) or the Registrar office will have the power to the request source of payment for these transactions and will have to report suspected cases to FIU.

The new measures come after a national risk assessment conducted in 2016 and 2017 as well as the recommendations of the Eastern and Southern Africa Anti-Money Laundering Group (ESSAMLG). Seychelles took over the presidency from Tanzania in September at the Council of Ministers meeting which took place in the island nation in the western Indian Ocean. The Group’s mutual evaluation report was adopted during that meeting.

At the Council of Ministers meeting in September, Vice President, Vincent Meriton, pointed out the challenges Seychelles, an archipelago in the western Indian Ocean, faces as a small island state with a relatively large exclusive economic zone of 1.4 million square km of ocean.

"The capacity to adequately police this zone, deter people from engaging into illegal activities and apprehending criminals associated with money laundering and the financing of terrorism remains a major challenge,” Meriton had said.

Moustache said that Seychelles “has a one-year period to show proof of effectiveness in our law against money laundering and terrorist financing or else the law has to be reviewed and put up to international standards.”

Under the new law, a committee will be set up to monitor and put in force policies and regulations related to money laundering. Sectors involved with fighting money laundering are expected to share information and work closely together to detect any cases.

The head of finance surveillance division at Central Bank of Seychelles, Naddy Hassan, said that once drafted the new law will make provisions to include other kinds of offences not addressed in the present law.

“The current law applies only to heavy criminal offences but under the new law, lesser criminal offences will also be sanctioned through warnings, monetary penalties and court proceedings, depending on the gravity of the offence,” said Hassan.