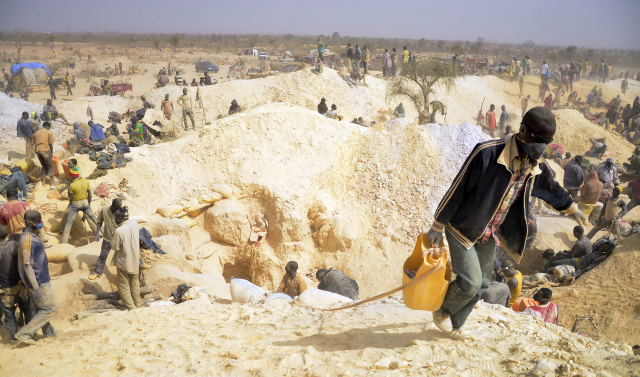 Miners work at a clandestine gold mine on February 20, 2014 in the village of Nobsin, 10km from the city of Mogtedo in the Ganzourgou region, where the gold fever doesnt spare children who risk their lives trying to find a way to survive. (AFP PHOTO / AHMED OUOBA)

(AFP) - Burkina Faso's government said Friday that rescue teams were struggling to pump out water from a flooded mine where eight miners have been missing for nearly three weeks.

The eight -- six Burkinabe, a Zambian and a Tanzanian -- were listed as missing when an underground section of the mine flooded on April 16 following heavy rain.

The accident happened at a mine owned by Canada's Trevali Mining in Perkoa, around 100 kilometres (60 miles) west of the capital Ouagadougou.

"The pumping machines that have been set up are operating (too slowly) for our taste, and there is no guarantee on this timescale that we will be able to find them alive as we hope," said government spokesman Lionel Bilgo, speaking after travelling to the mine on Thursday with a government delegation.

He said that every effort was being made "to find our eight brothers," with extra equipment and support being brought in from Ghana.

A rescue worker said the hope was that the eight, who had been working at a depth of 700 metres (2,300 feet), had been able to reach a "survival room" located at a depth of 580 metres, which had emergency supplies.

One of the pumps is able to remove 60 litres (16 US gallons) per second, but efforts to lower water levels at a faster rate are being hampered by equipment breakdowns, he said.

Bilgo, the government spokesman, said a gauge showed air was still flowing to the "survival room" and was therefore likely not flooded.

Antoine Bama, a relative of one of the missing, said he had been told that the rescuers had hoped to reach the survival room on Thursday.

"Sadly this date has gone by" with no news, he said, adding that he still hoped for a "miracle".

General » Be a reporter: Write and send your article » Subscribe for news alert
Tags: Burkina, mine, accident