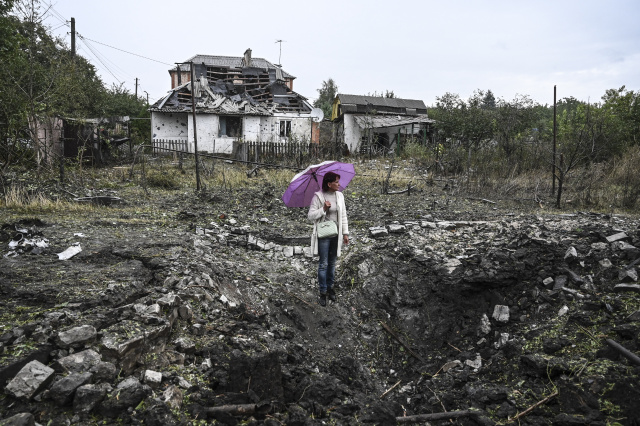 A woman stands in front of a destroyed house, in Kramatorsk, Donetsk region, on September 12, 2022, amid the Russian invasion of Ukraine. (Photo by Juan BARRETO / AFP)

(AFP) - Balakliya, a key city in Ukraine's northeastern Kharkiv region, was taken back from Russian forces this week, but it bears the scars of the violent conflict.

The city and the surrounding area has suffered from the months of violent conflict. It came back into Ukrainian hands as Kyiv's counter-offensive, begun earlier this month, began to bore fruit.

To the north of the city lay a motley mixture of dozens of civilian vehicles, lorries and burnt-out Russian armoured vehicles -- some bearing the Z symbol of the invading forces.

A few kilometres (miles) away, Ukrainian soldiers worked hauling away armoured vehicles and a tank recently abandoned by the Russian military.

Cases of munitions abandoned by the Russian forces were strewn across the highways.

Access to Balakliya, which before the war had a population of 27,000, has been made precarious after Russian forces destroyed two bridges before they pulled out on Wednesday, residents told AFP.

According to Ukrainian media only around one third of the population -- mainly the elderly -- stayed in the city during its occupation.

Now Ukrainian soldiers patrolled the main street, while a few residents made their way around -- for the most part on foot or by bike.

Although some buildings had escaped unscathed, many had either been destroyed or damaged.

"We were happy to meet the Ukrainian forces" when they arrived Wednesday, said 59-year-old Olexander Sidorov, an employee with a local electricity firm who battled to keep supplies going despite the conflict.

At the same time, he lamented the scale of the destruction.

- Borsch for the troops -

Many streets were all but deserted, but in the main square somebody had already raised the Ukrainian flag over statue of Ukrainian national poet Taras Chevtchenko.

Ukraine's defence ministry announced on Twitter Saturday that Balakliya was back in Ukrainian hands.

Iryna Stepanenko, 52, out biking in the city for the first time in months, recalled the months of occupation.

"There was a lot of fear, shelling. It was scary. We were hiding in the basement for three months," she explained.

They had not expected the return of Ukrainian troops, she admitted."When I saw ours with those patches, with the Ukrainian flag, oh it was great. Great."

But she still did not feel safe.

Andrii Kiktiov, 49, said the Russians had killed one of his friends for breaking a curfew during a "very scary" occupation.

"Moving around without a passport was forbidden," he said.

"All the phones were checked. If they found something with a yellow or blue colour on your phone they would put it on the ground and smash it with a butt of a rifle."

Alla Plesak, 53, could not hide her joy at seeing Ukraine taking back the city. She said she was off to prepare food for the troops with a friend.

"At the moment, the macaroni is waiting to be cooked. And my friend is finishing cooking the borsch", a traditional Ukrainian soup.

There were "tears, just tears" when the troops arrived, she added.

Danylo Grygorenko, a volunteer of 24, had brought in food and medical supplies for isolated residents.

"People are happy that it arrived, that people are back in their home (in Ukraine)," he said. "That there is no Russian occupation, no more oppression, no more basements, no FSB (Russia's Federal Security Service).

"But at the same time people are traumatised by the occupation."

And in the distance, people could still hear the regular retort of artillery blasts.