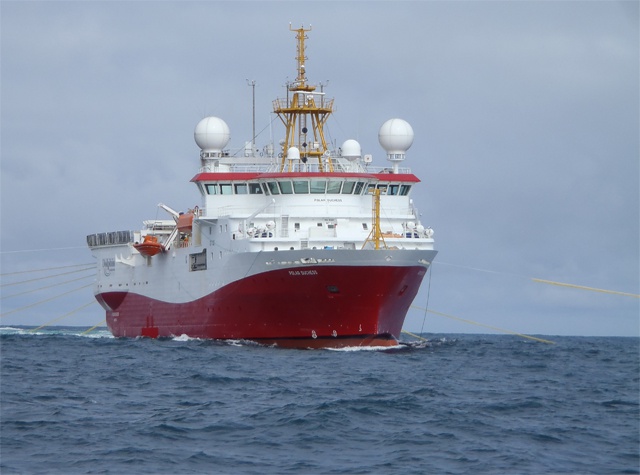 Ophir Energy is involved in oil and gas exploration in East and West Africa with interests in countries including Ghana, Gabon, Somaliland and Kenya.

The FTSE-listed company signed a farm-in deal with Australian oil company WHL in March under which Ophir stands to earn a 75 percent stake in WHL's offshore Seychelles assets in return for an investment of up to $17.0 million on exploration, including the conducting of some 1500 km² of 3D seismic surveying.

Dolphin Geophysical, a Norwegian service company won the contract for the survey and their 3D vessel, the Polar Duchess started acquisition on June 21.

Responding to SNA in an e-mail today, the state owned company responsible for regulating the hydrocarbon sector of the Indian Ocean archipelago, PetroSeychelles confirmed that Polar Duchess had completed the survey which lasted 37 days.

“The Polar Duchess started acquisition on June 21, they called into port for a crew change on July 9 and acquisition was resumed on the 10th. They have acquired in total 1526 sq km of 3D seismic data and associated gravity and magnetic data,” said PetroSeychelles’ Exploration Manager, Patrick Joseph in the e-mail.

PetroSeychelles says there was good cooperation from all local stakeholders which helped ensure the smooth completion of the survey.

According to a report published in Offshore Energy Today, the data gathered will now be sent for processing, with preliminary results expected in September this year. The data is expected to give the investors a better indication of whether drilling should commence around the surveyed areas and where it should take place.

“Good progress continues to be made with our Seychelles project with the completion of acquisition of the Junon 3D seismic survey, in a very short time period since Ophir assumed operatorship,” said David Rowbottam, WHL Energy’s Managing Director.

“The Junon 3D dataset is expected to provide a high definition subsurface image of the Junon structures and provide a number of prospects from which to select for drilling. The company is looking forward to receiving the processed data.”

The Ophir survey was carried out during the south-east monsoon trade winds, when less fishing activity takes place due to rough seas.

The Polar Duchess conducts marine seismic surveys by towing behind it two 6 km-long cables, also known as streamers, containing a series of hydrophones at constant intervals.

The streamers are deployed just beneath the surface of the water and are at a set distance away from the vessel. The seismic source is also deployed beneath the water surface between the vessel and the first receiver, and is typically fired every 15 or 20 seconds.

The low-frequency noises from seismic sources are known to have an impact on marine life, especially on whales, dolphins and porpoises, which use low-frequency vibrations to communicate across great distances in the oceans. The noises have been reported to cause deafness and behavioural disturbances in these marine mammals.

According to Ophir, the survey was completed “with no reportable environmental or safety incidents.”

“Besides minor issues, the survey went smoothly.  Marine Mammal Observers (MMO) were on board the vessel for the duration of the survey and Passive Acoustic Monitoring (PAM) equipment was in use during the first half of the survey but later removed due to the scarcity of marine mammals in the region during this time of year,” PetroSeychelles Joseph also confimed to SNA.

After conducting several assessments in the 1990s, Seychelles decided to freeze all exploration efforts in order to review domestic legislation pertaining to the energy sector. In June last year, the island nation invited oil and gas exploration companies to bid for exploration blocks after the lapsing of a two year moratorium.

Since the beginning of this year oil exploration in the Seychelles waters has been attracting more interest, in May PetroSeychelles, and Japan’s Oil Gas Minerals Exploration Company (JOGMEC) ordered a two week geochemical survey in the waters south west of the main Seychelles island of Mahé.

The Chief Executive of PetroSeychelles, Eddie Belle, also indicated recently that the country’s other exploration license holder, Afren, could also be seeking to conduct an additional survey within the Seychelles’ EEZ before the end of the year.