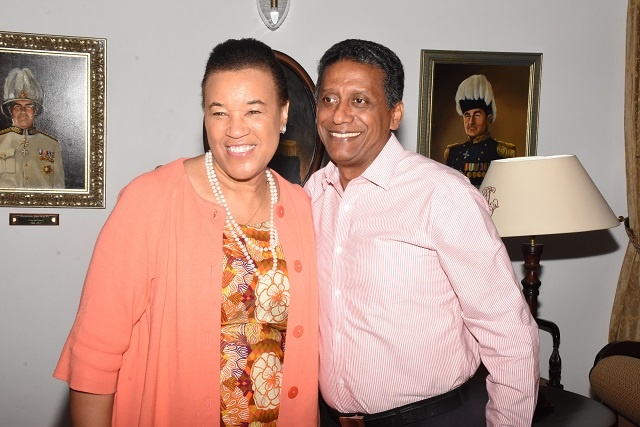 Scotland congratulated President Faure on receiving the Planetary and Leadership award during her visit at State House on Tuesday. (Louis Toussaint)

(Seychelles News Agency) - The Secretary-General of the Commonwealth has commended Seychelles for its marine management record, leadership role within the blue economy and for leading on the issue of climate change.

Patricia Scotland congratulated President Danny Faure on receiving the Planetary and Leadership award from the National Geographic Society in Washington, D.C., earlier this month during her visit at State House on Tuesday.

“Seychelles has really been a champion of climate change, a champion for our ocean, a champion for the blue charter. I think that it was wonderful that he, together with former President James Michel, won the Global Award from the National Geographic,” Scotland told the press.

She added that Commonwealth and Seychelles have been working closely on the climate change action plan and that the body is partnering with the island nation and Nekton to explore the ocean.

Scotland said that Seychelles has a magnificent record in terms of marine management because 26 percent of the ocean in Seychelles is now under conservation.

President Faure thanked the Secretary-General for her words and for the cooperation extended by the Commonwealth over the years. He highlighted the Blue Economy Strategic Policy Framework and Roadmap, which was developed with the assistance of the Commonwealth Technical Fund for Cooperation (CTFC).

Scotland and the head of state of Seychelles also talked about trade and the opportunities that exist as a result of the blue bond. She said that Seychelles plays a leading role when it comes to attaining the sustainable development goals, “giving courage and support” to other small states of the Commonwealth.

There are 2.4 billion people in the Commonwealth and out of the 53 countries, 31 are small states.

Scotland said that “what we do here together with Seychelles isn't just important for Seychellois, it is also important for the other 30 small states who are seeking to deliver on the sustainable development goals.”

The Secretary-General of the Commonwealth is on an official visit to Seychelles, an archipelago in the western Indian Ocean, relating to the Commonwealth Africa Innovation Ecosystem workshop being held at Savoy Resort and Spa.

The three-day workshop organised by the National Institute for Science, Technology and Innovation (Nisti) and the Commonwealth is bringing together member states of the Commonwealth.

It is providing a platform for discussions on incubating and fostering innovation to meet the needs of the billions of people who form part of the Commonwealth and to meet the multiplicity of challenges of contemporary society.

During the opening of the workshop on Monday, two Memoranda of Understanding (MoU) were signed. Both agreements are focusing on the catalysing and accelerating innovation in Africa and across the Commonwealth.