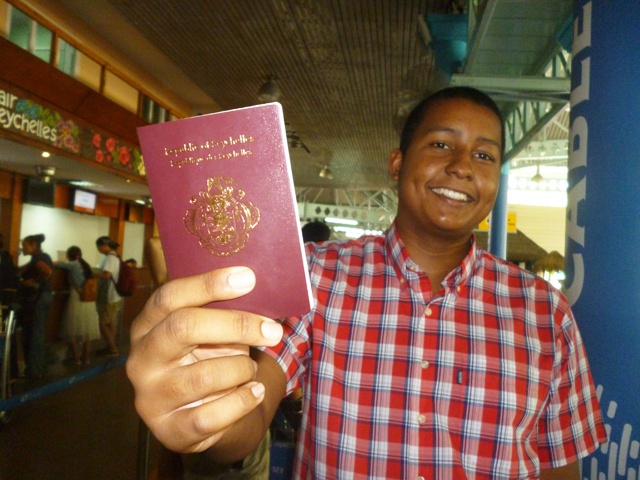 Seychelles citizens providing all the right documents can now have their passports in hand in 24 hours (George Thande, TVT)

(Seychelles News Agency) - Seychellois citizens can now count on being issued with their passport 24 hours after submitting their application to the archipelago’s immigration services instead of having to wait seven days as was the case before.

This comes now that the immigration services has reviewed the way it operates to offer a better service when it comes to issuing passports and permits.

In a press interview this morning the Seychelles Principal Secretary for Immigration and Civil Status, Charles Bastienne, said the new system is in place for several months now.

"That is conditional on the passport application being in order and since a few months, we have a front desk system to verify this and ensure that all relevant documents are in order and photos are appropriate," said Bastienne.

Similarly processing of a Dependent's Permit and Gainful Employment Permit (GOP) have gone down from three weeks to 5 days.

"For the GOP, it may however take a bit longer if an employer has submitted a large number of applications at the same time," remarked Bastienne.

The time frame has however not been reduced for Permanent Residence and Citizenship applications, as these involved a more complex procedure, based on a number of set criteria.

Since July an exam has been introduced for foreigners aspiring citizens of Seychelles.

Bastienne said that the Immigration Department has about 90 staff, most of whom have 30 to 40 years experience. Since last year, about 50 of them have been receiving further training to better cope with the new procedures in place.

"The new measures have been tested for about four months now. Now that we are satisfied that the staff are well-equipped, we are going public with the commitments," said Bastienne.

In a separate interview with SNA on plans for Seychelles to introduce biometric passports, the Chief Executive Officer for Immigration Ronald Fock Tave said the plans announced two years ago have been delayed because of financial constraints.

He said the Biometric passport, already approved by Government allows for more accuracy and security at passport controls.

Using the biometric system, Fock Tave said, it is possible to ascertain the difference between persons bearing strong resemblance by measurements in their facial features as well as fingerprints.

New measures introduced by the Immigration services to offer a better service not only to Seychellois citizens but visitors as well include having more desks for various categories of passengers in order for them to clear Immigration faster at the airport.

On top of having dedicated desks for Seychellois passport holders and non-Seychellois who are residing in Seychelles. Now, new desks have been installed for holders of Schengen documents.

Most visitors travelling to Seychelles are from the 26 member countries of the Schengen Accord, which covers a total population of around 40 million people.

Another new procedure in place is the provision for visitors to Seychelles to be granted a 3 month visa upon arrival compared to previously where visa was issued according to the duration of stay specified on the visitor’s travel documents.

Bastienne explained to SNA that several times visitors wanting to extend their stay at the last minute found that they had to go through a number of procedures that took a bit of time.

With the new 3 months visa visitors who wish to further extend their stay in the Indian Ocean archipelago will have to pay around $370 for an additional 3 months.

However, issuing of all visas or extensions will depend on applicants satisfying a number of conditions set by the department of immigration.

In July this year, the Seychelles passport was described as the African passport with the best access to the world with Seychellois passport holders able to visit more countries worldwide than Mauritius, South Africa, Kenya or Nigeria without the need to apply for a visa beforehand.

An infographic published by GOOD Magazine, which ranked countries according to the number of countries their passports can enter either without a visa, or with a visa on arrival, revealed that Seychelles passport holders have access to 126 countries, making it the African passport with the best access to the world, sitting in 28th position worldwide.