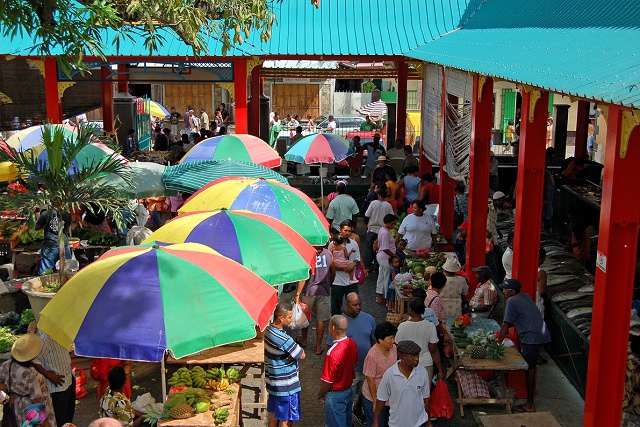 People in Seychelles engaged in their daily business in the Victoria market. The 2014 Ibrahim Index of Africa Governance which measures government performance, safety and rule of law, human rights, sustainable economic opportunities and human development has ranked Seychelles in 5th place overall out of 52 African countries. (Gerard Larose, STB)

The tiny Indian Ocean archipelago of 115 islands situated off the eastern coast of Africa with a population of 90,000 has been hit this year by a series of disappointments in global index rankings, such as the Human Development Index, the World Bank’s Doing Business report and the World Economic Forum’s global competitiveness report.

The small island nation is classified as an upper-middle income country and is usually highly-rated among its African peers in most global indices.

In an interview with SNA, Adam said the data requirements of many international indices change very often, making it difficult for small nations to comply with the demands.

“In the case of the UN Human Development Index they have changed [data requirements] almost every two years,” he said.

“We have not called into question the validity of these indices, but we have asked that there be more engagement and capacity building with countries such as Seychelles to address data gaps.”

“In most cases we have continued to be highly ranked despite having these gaps,” he added. “I am very confident that if these divergences are addressed, Seychelles will be even better placed.”

Seychelles is not alone in the statistics-gathering war. The demand for good-quality statistical data continues to increase.

Often in developing countries, under-investment in national statistical systems results in data of poor quality, which policymakers are unwilling to use, leading in turn to even fewer resources being allocated towards statistical development.

The World Bank, highly dependent on financial and development statistics to monitor key global, regional and national indicators, is working with developing countries, including Seychelles, to improve their capacity for national statistics systems.

Adam is concerned that the constantly-differing demands for data are too varied for small nations like Seychelles to cope with.

“While in many large countries the changes just mean substituting one set of data for another which is readily available, in Seychelles this means going back to the source in terms of data collection,” said the minister.‎

“And we are only notified of changes after they happen. We have informed our partners such as the UN of our concerns and we hope they will take them on board in the future.”

This week saw the release of the 2014 Ibrahim Index of Africa Governance (IIAG) which provides an annual overview of the quality of governance in African countries, seeing Seychelles slide in the rankings from 4th to 5th place overall out of 52 African countries.

Some of the top-performing countries, including Botswana, Cape Verde, Mauritius, Seychelles and South Africa got lower scores in at least one category of the index during the last five years.

Adam said that the government was proud that Seychelles’ many achievements were recognized in many indices, including the Ibrahim index, noting that that among the top five countries, Seychelles had the highest rate of improvement in its aggregate index score over the past five years.

“We always strive to do better,” he said. “And while it is disappointing to have lost one ranking compared to last year, we feel that many of our achievements have been recognized.”

A mixed bag of results

The Foreign Affairs Minister pointed out that many of the areas where Seychelles had improved in the index were areas that had come under criticism in the past.

“We welcome the criticism, and as is shown in this index, there are real and tangible improvements,” said Adam.

He went on to explain that some areas where Seychelles had recorded lower scores, for example in the education indicator, new data sets were required and was either due to outdated or unavailable data in the national statistics system.

Adam said that although Seychelles was seeing good results in indicators such as increased life expectancy, other challenges began to arise such as increased behavioural risks in the population, such as those linked to substance abuse, a growing problem in the Seychelles’ increasingly free economy.

“The development curve of many small island states is often challenged in this way, where after having very quickly gathered 'low hanging fruit' there is then a plateau in terms of improvements as the range of responses become more complex, and real results are more long term,” he explained.

The mystery of public management underperformance

The Public Management indicators, which include data on public administration, budget management and access to financials of state-owned enterprises, fell by a whopping 8.4 percent from 53.8% in 2013 to 45.4% this year, a drop that Adam is nonplussed by given the country’s increasingly good performance since beginning economic reform programmes with the IMF and the World Bank to improve governance and implement sound fiscal policies.

“I am not aware of any specific reasons for this, but we will examine this further within government and address the issue if needed,” he said. “We will look more closely at the Ibrahim Index to determine the reasons for this drop in the score, but we are confident in the strong management record of our Ministry of Finance.”

According to Adam, government is now working to reinforce the capacity of the National Bureau of Statistics and said there were also inter-ministerial working groups to increase cooperation in various sectors.