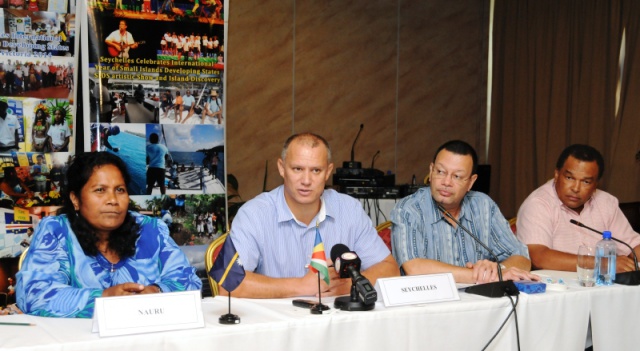 (Seychelles News Agency) - Despite being hardest-hit by the devastating impacts of climate change, finding the funding to battle its effects remains one of the biggest headaches experienced by small island nations.

The Alliance of Small Islands States (AOSIS) is adamant it will make its voice heard on the issue of funding at the upcoming UN climate talks in Lima, Peru next month.

This emerged during a press conference held at the Savoy Hotel in Beau Vallon, a popular tourist area in the north of the main Seychelles island of Mahé, at the end of a two-day meeting that brought ministers from AOSIS member states together.

This week’s meeting was the last chance for the organisation’s 39 members, all from small island and low-lying coastal states from all the different regions of the world, to agree on a mutual stance ahead of the United Nations climate change meeting in December.

The member states of AOSIS collectively agreed to take the message that action to counter the effects of climate change is now of vital importance, as their nations’ very existences are now threatened.

Speaking to journalists at the press conference the Seychelles Minister for Foreign Affairs, Jean Paul Adam, and the Nauruan Minister for Education and Special Presidential Envoy for Climate Change, Charmaine Scotty, agreed that the meeting, which they described as very productive, placed great emphasis on the importance of adaptation alongside mitigation.

However, despite their commitment to call for innovative solutions to global warming as well as the need to define mitigation and adaptation measures, the members said they were not under any delusions that the task ahead would be easy.

Their biggest concern is borne out of the knowledge that due to their size and geographical remoteness, island states are vulnerable and lack the required resources, technology, power and economic might to bring about the changes they need to by themselves.

In light of the lack of climate change funds available via the United Nations, Seychelles recently became the first African country to partner with the World Bank in preparing for natural disasters, after the bank's Executive Board of Directors approved a $7 million line of credit that would enable the Indian Ocean island nation to gain immediate access to emergency funds in the event of a natural or man-made disaster.

Despite solving the problem of access to funding when it is needed most, the burden of this type of debt may be too heavy for the Seychelles to bear. The nation of 90,000 inhabitants had to enter an IMF-assisted economic reform programme in October 2008 after the global financial crisis left the government unable to pay back its mounting debts.

The funding crisis means that many other small island developing states (SIDS) cannot put effective measures in place to mitigate and adapt to the impacts of rising sea levels, severe storms, flooding, mudslides and tsunamis.

Insult is added to injury when AOSIS considers that some of the developed nations responsible for emitting the highest amounts of earth-warming greenhouse gases have failed to play an equitable part towards taking responsibility for their actions.

Scientists from the Intergovernmental Panel on Climate Change (IPCC) have said that all countries need to commit to reducing carbon missions enough to limit the global warming to two degrees Celsius above pre-Industrial Revolution levels in order to slow down the effects of global warming.

The Seychelles ambassador for climate change at the United Nations and spokesperson for the Alliance of Small Island States (AOSIS), Ronald Jumeau, told journalists that past pledges made by rich nations who are also the biggest emitters of harmful gases have not been honoured.

Pledges made as far back as 2009 at the first funding conference in Copenhagen for example are yet to be honoured and countries hardest-hit by climate change are still waiting in line for funding aid.

One of the initiatives to gather funding that was widely discussed during the two day meeting is the Green Climate Fund (GCF) launched in 2011, which aimed to raise 100 million dollars’ worth of funding for climate change adaptation and mitigation annually up to 2020. However, the GCF has been met with a predictable mixture of resistance and delaying tactics from developed countries.

So far, only France and Germany have acted upon their commitment to the fund and have each donated $1 billion, while a handful of other countries have contributed some $800,000 combined, with Sweden being the latest to contribute.

Jumeau told the press conference that AOSIS is of the view that if GCF is to collect $100 billion by 2020 then it needs to secure at least $15 to 20 billion by the time the climate change conference in Lima, Peru rolls around next month, an unlikely goal if there ever was one.

“At the moment there is only $2.8 billion,” he said. “Moreover, some of the developed countries that are supposed to contribute have already announced that they will not be doing so. If by the time we get to Lima one year ahead of the Paris meeting in 2015 we only have $2.8 billion, when we get to Paris how much money will we have?”

Faced with this stark reality, the AOSIS negotiators know they have a daunting task ahead as without adequate funding, climate change adaptation and mitigation are not realizable.

“We are now talking about adaptation together with mitigation, as we have gone beyond the situation which require mitigation, but are now faced with realities where we have to adapt to the negative impact of climate change. Along with this we now also have the need for funds for loss and damage incurred due to climate change. And the funds for this have not even been identified as yet,” Jumeau said.

“We cannot afford silence at this moment in time. Already at least four of our member states are facing definite disappearance; it’s just the time frame which is not definite. It may happen during this century or later but they will definitely sink and all the rest of us will be affected too. So we have to keep hammering home the message for mitigating actions now,” said Jumeau.

Minister Adam added on to this saying that while the prognosis may be bad for SIDS, even developed countries will also be affected with big cities like New York and London likely to have to deal with rises in sea level, although these countries have more means at their disposal to put up barriers and defenses.

“So we have to find innovative solutions and we will be pushing these forward at Lima and in Paris. We in Seychelles, for example are advocating the debt for adaptation swap project, which will give us leverage in the negotiations and be our contribution to finding workable solutions.”

Now that AOSIS members have finalized their common position the stage is set for the upcoming meeting in Lima in preparation for the final conference in Paris in 2015 which is expected to see a global pact that will seek to limit average global warming to two degrees Celsius in order to slow down the effects of global warming.

In an interview piece published today by daily Newspaper TODAY in Seychelles, the Seychelles Ambassador for Climate Change spoke about the dwindling chances of reaching a binding agreement at the Paris meeting.

“The recent Republican victory in the elections in the US means that President Obama’s hands will be tied on climate change. And if the US doesn’t budge on climate change, neither will China. In Lima, we’ll be able to see what effect the elections will have on the process. But we’ve got a lot of work to do.”

At the launching of the conference on Tuesday it was announced that the AOSIS chairmanship, which for the last three years has been led by Nauru, a small island in the South Pacific, would be handed over to Maldives from 2015 until the end of 2016 and that Seychelles would take up chairmanship between 2017 and 2018.