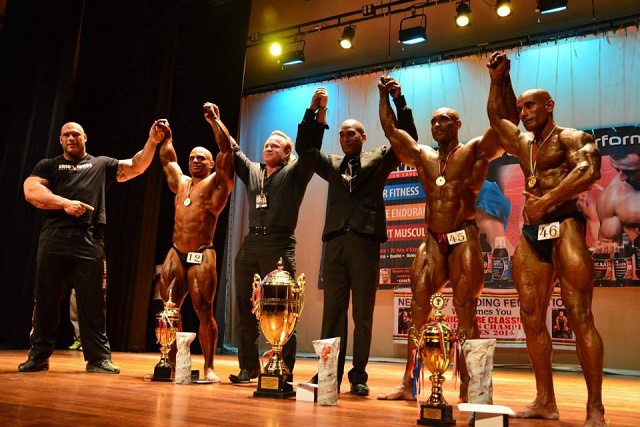 Over 40 bodybuilders from Seychelles, Mauritius, Rodrigues and Madagascar took part in the Éric Favre Classic 2014 - Night of the Champions on November 22.(Mauritius Bodybuilding/Facebook)

Mekdachi along with Rodney Henriette and Fabien Antat, the second and third place winners of the 2014 Mr Seychelles were amongst the over 40 bodybuilders who participated in the regional competition at the Mahatma Ghandi Institute, in the western district of Moka.

The ‘Éric Favre Classic’ is the equivalent of a former competition bringing together bodybuilders from the island nations of the region to choose a ‘Mr Indian Ocean’.

The competition is an initiative of French national, Éric Favre, a former bodybuilder and an international coach working with the International Federation of Body-Building (IFBB) who has made the island of Mauritius his present home.

A high spirited Mekdachi having recently won the Mr Seychelles title for a third time shortly after coming out second overall at the Mr. Olympia for amateur bodybuilders, held in South Africa battled it out with the Mauritian bodybuilding champion Denis Ayen who is also the reigning champion of the Indian Ocean championship held in 2011

Ayen who was performing in front of his home crowd, flexed a well-proportioned body that fittingly earned him the overall best title on top of coming out first in the 95+ category.

The Chairman of the Seychelles Bodybuilding Federation (SBBF) Regis Delorie told SNA that Ayen is a semi-professional athlete and a top class bodybuilder in the region as he has occasionally benefited from performing at high-end competitions in Europe.

His performance at the Indian Ocean event meant aspiring Seychellois professional bodybuilder Ziad Mechachi could only manage second place overall, after having dominated the 95kg category.

The next best performance by a Seychellois representative at the competition was achieved by Rodney Henriette who finished fifth overall in the finals and as the winner of the 65kg category.

Henriette is also an accolade of another local title, Mr. Regatta was in awe of his Mauritian counterparts when he spoke to the Seychelles News Agency (SNA).

He said the Seychelles’ neighbours have evolved past their Seychellois colleagues over the last years, noting that Ayen (the overall winner) fully deserved to win the event.

“Even the duo that came in third and fourth respectively were impressive,” he affirmed, before asserting that “hope is not lost for us as we are not lagging too far behind.”

But the sentiment that Mauritius has surpassed Seychelles in the sport was not shared by the third Seychellois who took part in the competition.

Third place winner of this year’s Mr Seychelles contest Fabien Antat also claimed third place in Mauritius in the 90kg class but he said he expressed disappointment with regards to his ranking as well as Mekdachi’s second overall position saying “Mechdachi deserved the overall title.”

Nevertheless the Seychellois claims there are no hard feelings seeing that some positive things have come out thanks to their participation in the competition.

According to Antat the event’s benefactor Éric Favre will be visiting the Indian Ocean archipelago soon where he is expected to engage in talks with the local authorities on the possibility to host the contest in Seychelles next year.

“Furthermore three Seychellois bodybuilders have been invited to participate in an event in Canada next year, all expenses paid for by the Favre Classic sponsor, who has been impressed by us,” added the former Mr Seychelles.

According to Mauritian Newspaper, 'Le Mauricien' the ‘Éric Favre Classic 2014 - Night of the Champions’ bodybuilding event saw the participation of bodybuilders from Seychelles, Mauritius, Rodrigues and Madagascar.