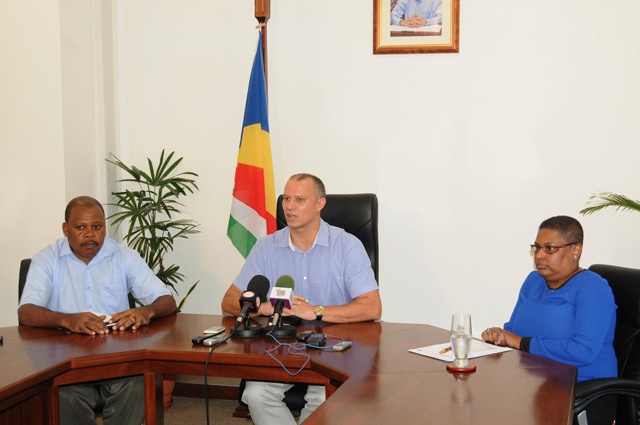 In his first press conference as Minister of Finance, Trade and the Blue Economy, Jean-Paul Adam has put to bed any doubts of the government changing its economic policy (Patrick Joubert, Seychelles News Agency)

(Seychelles News Agency) - The newly-appointed Seychelles Minister of Finance, Trade and the Blue Economy, Jean Paul Adam, has vowed to uphold the work of his predecessors in implementing a sound economic policy for the Seychelles.

The 115-island archipelago of 90,000 inhabitants were led through a five-year programme of IMF-assisted economic reform in 2008 by the country’s president, James Michel, after mounting external debts and the global economic crisis led the government into default.

The president’s re-shuffle of the ministerial cabinet at the end of January saw the sudden exit of finance, trade and investment minister, Pierre Laporte, an economist by trade who was previously the IMF’s representative in Niger and later the Governor of the Central Bank of Seychelles before his appointment in March 2012.

In a press conference held for members of the local media on Monday afternoon, incoming minister Adam, who was previously Minister of Foreign Affairs, answered questions regarding his ability to handle the exchequer’s position with firm confidence.

The minister met with the press at his new headquarters, Liberty House, situated in the Seychelles capital of Victoria alongside the Governor of the Central Bank, Caroline Abel and newly-appointed Minister of Investment, Entrepreneurship and Business Innovation, Michael Benstrong.

“Firstly I would like to say that I am very pleased to have been given the opportunity to head this ministry for Finance, Trade and the Blue Economy,” he told the media. “The appointment is in the spirit of continuity - I am taking over this new role very much continuing the same policies that have been put in place by the government and by my predecessor, Pierre Laporte.”

While admitting that the Finance portfolio was one that was more complex than his previous ministry, he expressed confidence that his experience stood him in good stead for the challenges ahead.

“To look at the question in a direct way: am I the right man for the job at this time? I feel that the team at the Ministry of Finance is very strong,” he said. “I am coming into this position to reinforce the work that has already been done and also look at the ways we can create new opportunities for Seychellois business.”

Minister Adam reiterated that there would be no change to the country’s macroeconomic policy or fiscal policy.

A bow to the old guard

“I feel that the foundation of the economy of Seychelles has already been established as a part of the reform process that we have put in place over a number of years and began in 2008,” continued the minister.

“This reform was not implemented by just one person – President Michel himself initiated the reform, and during that time Vice President Danny Faure took on the role of Finance Minister. Minister Laporte travelled in the same direction and I will also be looking for a continuation of this.”

“I would like to take the opportunity to put on record our great appreciation for all that he has done. I think that he has made a great contribution in the economic performance of Seychelles and putting Seychelles on the path towards sustainable macroeconomic policies,” he said.

Focus on the moneymakers

Going forward, Minister Adam said he would be placing greater emphasis on revitalising the country’s main sources of foreign exchange, mainly the tourism sector and the newly-created department under his control, the Department of the Blue Economy.

Adam announced that a series of “in-depth” consultations with the tourism sector to address problems and identify possible solutions in order to increase the yield across the industry.

“We depend on tourism almost completely, and we need to make sure it works even better than it is working right now. We feel that there are a lot more opportunities, so we will work with [Investment, Entrepreneurship Development and Business Innovation Minister Michael Benstrong and the private sector to look for other opportunities and innovative ways to bring us forward.”

Minister Adam said it was “not by accident” that the Blue Economy portfolio was put together with the Finance ministry, describing the concept of generating innovative and sustainable industries from the Seychelles’ extensive Exclusive Economic Zone as one of the most important elements for diversifying and decreasing the economy’s risk from external shocks.

“I think one of the key messages that came out was that we needed better coordination, and this will be the purpose of the Blue Economy department; to better coordinate what all government departments are doing in relation to developing our ocean,” said Adam.

The minister clarified that the department would not replace existing departments but would instead “complement and coordinate what other departments are doing”.

The minister also described the offshore banking and international financial services sector in Seychelles as being at a “critical juncture”.

“This year we will consolidate the legal reforms that we have done, but also build capacity within the sector; both within the private sector but also within the regulatory functions that are held by government entities to ensure that we can properly develop this sector so that it can fully reach its potential.”

The minister said he believed there could be a lot more diversification in the types of products offered.

“It is not enough to merely register companies,” he explained. “We need to work with the private sector to offer more services for all of these types of services to create more opportunities.”

Sticking to the budget

In response to a journalist asking about the recently-announced national budget for 2015, Minister Adam said that the budget would be adjusted only where necessary in light of the government’s re-structuring.

Saying that he “respected the power of Parliament”, Adam said he alone did not have the power to change anything in the budget, but that the normal process of budget review was ongoing within the finance ministry to make necessary adjustments.

“For example, there are certain elements that will need to be adjusted, for example the creation of new posts, the devaluation of the rupee, but all in all when we speak of the budget that we as government, under Minister Laporte, presented to the National Assembly, we support this budget and we will implement it,” he stated.

“However, because of the restructuring that government has done, we are going to be working more closely with the private sector, and if the time comes that we need to make certain adjustments, we will make them, certainly. If Minister Laporte was sitting in this chair right now he would have told you the same thing.”

When asked what his approach would be to misuse of public funds, Minister Adam responded that he believed the Office of the Auditor General was “doing its job”.

The 2013 report of the Auditor General was released late last year, citing “no serious misuse” of public funds and a general improvement in the way that public funds were managed.

However, in an interview conducted last month, Auditor General Marc Benstrong told SNA that in general greater compliance to financial legislation and regulations was necessary to ensure strong management and oversight on the use of public funds.

Minister Adam said at the press conference that as Finance Minister he would make “greater effort” to raise questions related to mismanagement of taxpayer’s money and address them directly with the ministries concerned.

The Minister stated that the Audit system in Seychelles was strong, and it included not only the AG’s external audits but also recently-implemented internal audit procedures both within the Ministry of Finance and each individual ministry, put in place with the assistance of the IMF and the World Bank.

“If tomorrow you get a report from the Auditor General that has nothing inside it, you would say that Audit is not doing its job properly,” he said.