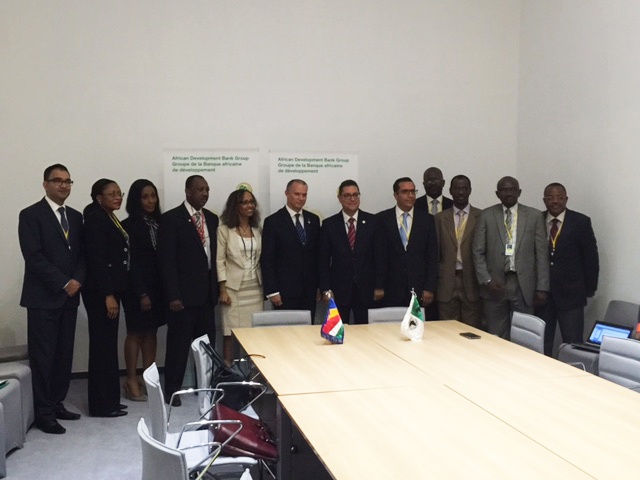 (Seychelles News Agency) - On the Seychelles’ main island of Mahé, inhabitants are often faced with daily water rations during the annual dry season of May to September, but this inconvenience could one day soon be a thing of the past.

The African Development Bank (AfDB) has signed a loan agreement worth $20.6 million with Seychelles Minister for Finance, Trade and the Blue Economy, Jean Paul Adam on Wednesday for the Mahé Sustainable Water Augmentation Project, according to a press statement issued by the ministry on Friday.

The 115-island archipelago of 90,000 inhabitants can currently only meet around 60 percent of its potable water needs due to limited storage capacity, increased demand for housing construction, and water losses along the network.

The loan was approved by the AfDB Board of Directors in April this year.

A grant component was also included in the agreement to the value of $1.4 million from the Middle Income Country – Technical Assistance Fund’s (MIC-TAF), and a further 1.07 million Euros ($1.17 million) under the AfDB’s Africa Water Facility.

The main project will include works such as raising the height of the La Gogue Dam by six metres, the construction of a new water treatment plant downstream of the dam, upgrading the network of water pipes around the islands and the recruitment of various consultants and technical assistants.

A second project allocated under the MIC-TAF fund aims to carry out a study on the groundwater and small to medium scale storage potential on the three most populated islands of Mahé, Praslin and La Digue.

According to the press release, Minister Adam noted that while the challenge for sustainable water investments was a global one, Small Island Developing States such as Seychelles faced the most risk in relation to disruption of water resources due to climate change, and emphasised the importance of these projects as part of Seychelles’ integrated water strategy.

The finance agreement was signed on the margins of the AfDB’s annual general meeting, where among other business, the development bank’s new president, Nigerian Akinwumi Adesina was elected to lead the bank for at least the next five years.

A total of 80 AfDB shareholders, including 54 African and 26 non-African countries, took part in the election in Abidjan, in which eight candidates were vying for the top position.

The president of Seychelles, James Michel, has delivered a message of congratulations to the incumbent president, as well as his ‘warmest appreciation’ for his predecessor.

Current AfDB president, Rwandan-born Donald Kaberuka is expected to complete the second and final term of his office at the end of June.

In a press statement released by State House on Friday, President Michel said that the newly-elected Dr Adesina has all the necessary credentials to ensure inclusive growth of the continent as well as to enhance the development bank's leadership in financing for sustainable development.

President Michel also conveyed Seychelles' appreciation to Cabo Verdean President Jorge Carlos Fonseka and his Prime Minister, Jose Maria Neves, for what was termed the ‘dynamic candidacy’ of Dr. Cristina Duarte, the small island state's current Minister of Finance who had received backing by Seychelles and other African SIDS for the post.

Duarte achieved third place in the elections with 10.27 of the vote and would have been the first woman and Portuguese speaking bank president.