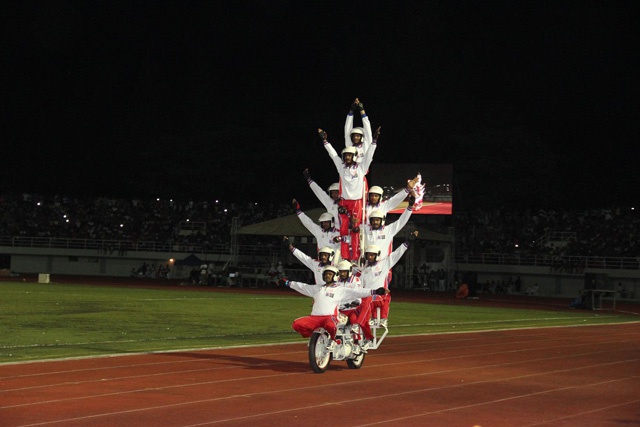 One of the stunts by the boys on the motorcycle from the Indian Army's military police. (Patrick Joubert, Seychelles News Agency)

(Seychelles News Agency) - For the first time in Seychelles history, June 29, a public holiday previously observed as the Independence Day has today been celebrated as the country’s National Day which culminated with a spectacular display by an Indian Army's military police motorcycle stunt unit.

Enthusiastic cheers resonated at Stad Linite as the crowd witnessed for the first time in Seychelles a spectacular and highly-anticipated display by the motorcycle unit known as ‘Shwet Ashw’ (White Horse).

The 42-man motorcycle unit from Bangalore which has achieved two Guinness World Records was flown in by a special military aircraft on Monday this week by the Indian High Commission.

Kitted out in white and red and performing on white 500cc Enfield motorcycles, the team went on to perform what can be described as ‘death-defying’ acrobatic stunts to the amazement of the Seychellois public and captured by the lenses of photographers gathered at the event.

29th June is the day the 115-island archipelago gained independence from the British exactly 39 years ago in 1976.

National Day was previously observed on June 18, but this date has from 2015 been marked as Constitution Day to celebrate the adoption of the current constitution in 1993.

At the last National Day celebrations on June 18 last year, Seychelles President James Michel attributed the decision to change the date “as an effort to create greater national unity.”

Thousands of Seychellois gathered this evening to witness this historic moment at ‘Stad Linite’, the country’s main stadium with a capacity of 12,000 seats.

The cool atmosphere, just as the sun was setting was ideal for the traditional military parade which has this year seen the participation of some 23 platoons.

The platoons, which paraded the oval tracks of ‘Stad Linite’, included some one thousand personnel from different units of the Seychelles police force, the defence forces, the fire and rescue services agency as well as civilian groups, mainly from youth organisations in the country.

They marched to the beat of the Seychelles National Brass Band, which was accompanied this year by musicians from the Indian naval band, in the presence of the guest of honour for the National Day, the President of Palau Tommy Esang Remengesau.

International participation in this annual event also included a platoon of the police of the neighbouring Indian Ocean island of Mauritius, the Australian, Indian and French Armed forces also paraded

The French armed forces were also joined by their fellow countrymen from the French Forces of the Southern Indian Ocean, based in Reunion island, who parachuted from a military aircraft with parachutes, tied to the national flags of Seychelles, France and Palau.

The National Day celebrations committee has introduced some new elements in this year’s celebrations which also featured a spiritual component. Members of the Seychelles Inter-Faith Council which brings together the different faiths present in Seychelles were invited to lead a moment of reflections and blessings.

This evening’s National Day celebrations also saw the participation of some 500 young people aged 11 to 30 years old who brought out cheers from the crowd as they performed synchronised routines dancing with lights to the beat of a mix of both Creole and modern music.

Their performances depicting the culture and diversity of the Seychellois people as well as the environment and the national theme of this year “I Love Seychelles” was put together by a Seychellois, Valerie Jumeau, and members of the Seychelles National Youth Council.

The evening also saw performances by Seychellois artists including the winners of a song competition organised for National Day.