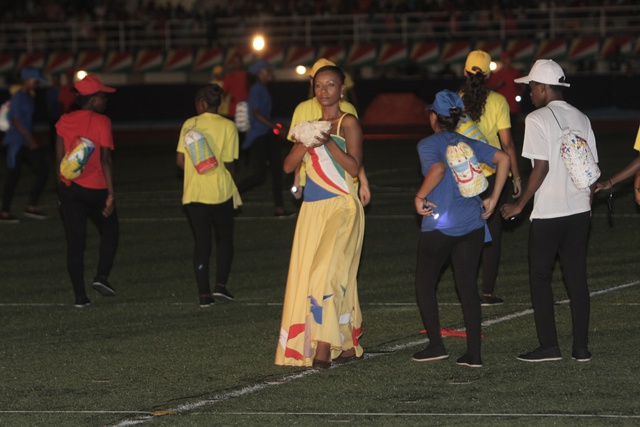 400 school children, danced together with lights  and drums, creating together the national flag as well as other  symbols on the Seychelles National Day (Joe Laurence, Seychelles News Agency)

(Seychelles News Agency) - The skies of Victoria resonated with fireworks tonight as one of the world’s smallest capitals celebrated a historic moment as it is the last time the Seychelles, an Indian Ocean island nation of around 90,000 people commemorates its National Day on June 18. It had celebrated this day for the last 21 years as the start of the Third Republic when the Constitution of the country was adopted.

The Seychelles ruling party ‘Parti Lepep’ congress  voted a resolution on May 31 to ask the government to make the 29th of June the Seychelles National Day as of next year, which is the anniversary of the country’s independence from Britain in 1976. 18th of June will be known as Constitution Day in 2015.

Thousands of Seychellois witnessed this historic day as they gathered at ‘Stad Linite’ the main stadium of the islands for the National Day military parade, this year in the presence of the guest of honour for the National Day, the President of Cabo Verde Jorge Carlos Fonseca.

The event kicked off just as the sun was setting clearing the way for a cool atmosphere this Wednesday evening.

Fifteen platoons paraded the tracks of ‘Stad Linite’ marching to the beat of the Seychelles National Brass Band, including units of the Seychelles police force, the defence forces, the fire and rescue services agency as well as civilian groups mainly youth organisations in the country.

A platoon of the French Armed forces also paraded in this annual event, and were joined by their colleague countrymen who fell out of the sky with parachutes, tied to the national flags of Seychelles, France and Cabo Verde.

The crowds  cheered loudly to the synchronised routine of 400 school children, who danced together with lights  and drums, creating together the national flag as well as other  symbols such as a sailing boat and the waves of the ocean on the stadium pitch.

In his traditional address, Seychelles President James Michel took the time to talk about the raison d’etre that the National Day had been celebrated on June 18 the last 21 years.

“The date is rooted in the collective memory of Seychellois. It opened a key chapter in Seychelles’ history. It commemorates the day the Third Republic was born. The day our nation adopted a new Supreme Law our Constitution,” said Michel.

While he says it was entirely appropriate for the founding fathers of the Third Republic to adopt the 18th of June as the country’s National Day the Seychellois head of state has attributed the decision to change the date as an effort to create greater national unity.

“We need national unity in order to undertake the long march toward the New Frontier.  We need to unite the whole nation for a common cause – Seychelles.  We have to go forward in peace and harmony……... The only solution, I am convinced, is national unity.”

Michel stressed that choosing the day Seychelles gained its Independence on the 29th of June as the new National Day “is dictated by historic reasons.”

“This date symbolises the birth of a people, hope for the future, the achievement of victory, the crowning of a struggle……The 29th of June is an incontestable date in our history. It is a date that is unanimously accepted among Seychellois. It is a unifying date. A date that rallies us around the symbols that represent our wealth, happiness and well-being of the people that we are… It is about national unity, patriotism, solidarity, fraternity, love and respect for our fellow Seychellois,” said Michel.

Religious leaders and opposition political parties had in the past asked for Independence Day to be named the National Day.

Consultative forum to be created

Michel also announced that he would soon create a consultative forum.

“This high level forum, which I shall chair myself will include certain individuals – irrespective of their political affiliations – who have distinguished themselves by their knowledge, their experience, their goodwill and service to the nation,” he said.

“The role of this forum will be to deliberate on all issues which directly impact the national interest, and to make concrete proposals which government will consider seriously….Consultations are the key to national unity. Consultations assist government in making good decisions.”

Michel spoke about the progress that he says Seychelles has made over the years noting that Seychelles is set to join the world’s high oncome level countries according to a recent World Bank Study.

He stressed that strengthening the entrepreneurial spirit and encouraging small business development would lead Seychelles to achieve the desired economic growth necessary to attain this goal.

Michel also announced that the government would increase housing subsidies.