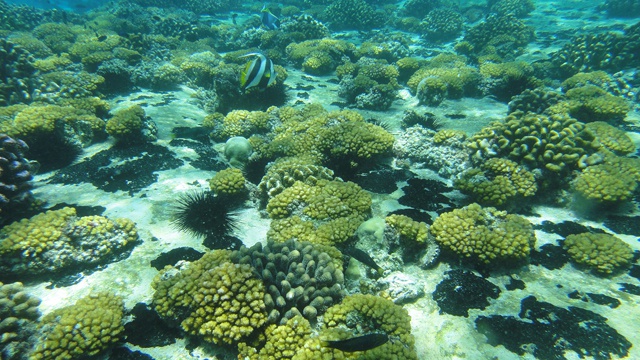 A recovering reef with new recruits in the Seychelles (Rodney Quatre)

(Seychelles News Agency) - After a string of heatwaves causing havoc in various places in the world in recent months, American climate scientists have issued a warning about steadily rising ocean temperatures in the Eastern Pacific and the Atlantic, with a prediction that from 12,000 to 15,000 square kilometres of delicate coral reefs could soon be lost forever.

The U.S. National Oceanic and Atmospheric Administration (Noaa) on Monday announced the threat of imminent coral bleaching in the Caribbean due to hotter-than-usual oceanic temperatures which could persist until 2016.

The estimated area of coral reef at risk of permanent loss was calculated based on research carried out in the Seychelles by Australian researcher Dr Nick Graham, based at the James Cook University in Queensland.

The Seychelles archipelago of 115 islands, situated in the western Indian Ocean off the eastern coastline of Africa, experienced a mass coral bleaching event in 1998 brought about by a disruptive weather phenomenon.

Seawater temperatures rose by 2° to 3°C for a period of a few months, and the sensitive island ecosystems of the Seychelles islands were badly affected, with up to 90 percent of the coral reefs bleached as a result of this temperature rise.

The El Niño Southern Oscillation (ENSO) is a periodic shift of the ocean’s atmospheric conditions in the tropical Pacific that has an impact on weather patterns all over the world. The phenomenon happens every three to seven years and is associated with floods, droughts, and other global disturbances. The last El Niño was in 2009.

Climate experts from NOAA and the World Meteorological Organisation (WMO) predicted as early as last year that increasing global temperatures had created a large patch of hot water in the Pacific Ocean, known as ‘The Blob’, pointing to the rise of a new El Niño event.

However, Dr Graham in his 2014 research paper published in the Nature journal, documented the slow but steady recovery and adaptation of Seychelles’ reefs, particularly those in deeper water which had a firm substrate to support the settlement of new coral recruits.

The researchers from Australia, the United Kingdom and France, used twenty years of data collected in several sites around the Indian Ocean archipelago of 115 islands, particularly around the inner ring of 40 granitic islands which were affected by coral bleaching the most of all.

They were especially interested in data collected before and after the 1998 El Niño phenomenon in 21 reefs around the inner islands.

Using this information, they identified thresholds that indicated whether or not the reefs would recover.

“Putting numbers on the threshold points at which reefs either recover or degrade helps predict reef futures under climate change,” Dr Graham told SNA in an interview last year.

And it seems that this indeed has been the case, with the Seychelles data being utilised as a model for probable recovery rates elsewhere in the world.

The Director of the Global Change Institute at the University of Queensland, Professor Ove Hoegh-Guldberg, has expressed concerns about the sensitive corals’ ability to recover and adapt to warmer oceans given the rate of the warming.

“We’ve only had a 0.8C change in global temperature,” he told the Guardian newspaper on Wednesday. “We’re already starting on a journey where just a mild change in temperature is causing a massive deduction in coral reefs. Just imagine when we get to 2C or 3C or 4C.”