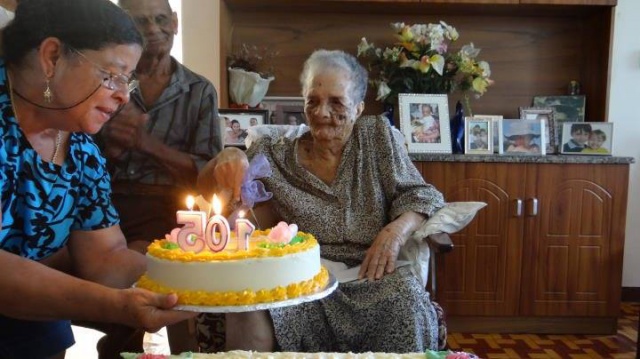 (Seychelles News Agency) - What is the secret behind several members within a single family living to be centenarians?

The answer to this question is not known even by the family in question: the Hoareaus, who reside at Roche Bois on the outskirts of the Seychelles capital of Victoria.

This is especially now that they celebrated another joyous occasion yesterday, as their mother, grandmother and great-grandmother, Marguerite Hoareau who was born on July 10, 1910 turned 105 years old.

Marguerite’s grandson, Selwin Hoareau, told SNA that this year it was a rather small gathering as the family was still mourning the recent death of his grandmother’s first-born son who would have turned 81 years old this year.

Nevertheless, family members, especially the youngsters, as well as close friends did not miss the opportunity to sing happy birthday to the oldest member of the family.

Hoareau is actually the third person in her family to achieve a very rare feat; that is, to live past their hundredth birthday.

One of her sisters died not long after she celebrated her 100th birthday and Marguerite’s own mother died just about six months before turning 110 years old.

According to Selwin, her grandmother is relatively well aside from common old age ailments and an ear problem.

“She is generally still strong but in recent years she has become less mobile so she spends most of her time in her bed... she also has an ear problem which she suffered because of the change in air pressure in the plane some 35 years ago while travelling to the UK and has not recovered since and has gotten worse as she grows older,” Selwin told SNA.

“She cannot cope with noise and sometimes when we are talking at home she would just go "please stop making so much noise."

Marguerite, whose husband died more than 30 years ago has had seven children, among which only four are still alive.

Seychelles has witnessed quite a few centenarians in recent years.

According to figures available from the Seychelles National Bureau of Statistics website dated to 2013, life expectancy among the islanders in general is 74.2 years old.

The data also shows the tendency that Seychellois women tend to live longer than men with the life expectancy of female being 79.5 years and for male 69.3 years.

Latest information provided to SNA by the Seychelles Ministry for Social Affairs, Community Development and Sports, in May this year, showed that there were nine centenarians, all of them women, living in several parts of the Seychelles islands.

With Hoareau’s 105th birthday, she is now only one year behind the oldest Seychelles citizen, being Nancy Marie from English River.

Earlier this year also saw May Celtel celebrate her 100th birthday in Florida, nearly 14,800 km away from island home of Seychelles. Celtel who was born in Kenya from Seychellois parents has lived in Seychelles since her teenage years until six years ago when she moved to Florida.

Oldest man in Seychelles passes away