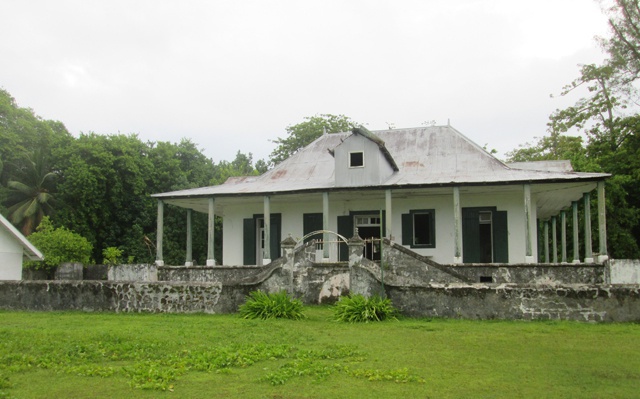 One of the main plantation house of the Chagos Islands, called 'Grann Kaz', once the heart of a thriving coconut industry, lies abandoned and forlorn after the British government forcibly evicted hundreds of Chagossians to make way for a US military base. (Alvin Tirant)

(Seychelles News Agency) - The British High Commission in Seychelles has distributed consultation documents to the Chagossian community in the country to get their opinions on how their possible resettlement to the Chagos archipelago could be carried out and the cost implications of the move.

They have until the 27th October to submit their views - almost 47 years since the Chagossians were expelled from the islands by the British government.

“They [Chagossian community leaders] have been invited to meet with staff of the High Commission to discuss the consultation documents, address any issues which are not entirely clear… a meeting is expected to take place in the coming weeks,” an spokesperson from the British High Commission in Seychelles responded to SNA in an email request for comment. “The UK Government is committed to maintaining a transparent and inclusive approach in its British Indian Ocean Territory policy review.”

The Guardian newspaper reported this month that a British Foreign and Commonwealth Office (FCO) consultation document said “management of a limited tourist industry in the outer islands could be implemented on a trial basis initially and would require relevant training for those interested in such work.”

The paper suggested plans to cater for increasing yacht visits, as neither commercial flights to the islands nor permanent infrastructure such as hotels will be permitted by the British authorities at the moment.

The proposal suggests the return of up to 1,500 Chagossians and their descendants, as well as allowing tourists to visit the long-forbidden islands, which are home to a US military base on the main island of Diego Garcia, in what is now known as the British Indian Ocean Territory (BIOT). The lease of the American military base expires in 2016.

According to The Guardian, British ministers delayed making any decision concerning the resettlement earlier this year even though they promised to find a solution before the end of the last session of parliament.

The British government still needs to complete the consultation process with the exiled Chagossian communities in Mauritius and Seychelles. A decision on the matter could be taken by 2015 or early 2016. A feasibility study by KPMG and commissioned by the FCO was carried out last year.

In a press statement issued last week, Mancham suggested that Seychelles and the British government should engage in offering certain assistance and encouragement to the development of tourism in some parts of the Chagos archipelago.

Mancham said that Seychelles had over recent years acquired considerable experience in the development of tourism, adding that if no commercial plane would be allowed to land in Diego Garcia, this meant that international visitors could fly to Seychelles from where they could avail themselves of a cruise ship to take them to the Chagos islands.

He also added that Seychelles had an advantage over Mauritius because it is situated outside the cyclonic belt.

The Chagossian people in Seychelles have welcomed the consultation and view it as a serious commitment by the British Government to carry through with the resettlement programme. They describe themselves as direct custodians of the islands and believe they are in the best position to protect them.

“The study looks at different resettlement options, including initial group sizes, infrastructure requirements in line with modern living expectations, access options to the islands and commercial options for employment of Chagossians that decide to resettle the islands. Any development program should take account of necessity to protect the environment of the territory,” said Gilberte Gendron, the chairperson of the local Chagossian Association in an email response to SNA.

The association was critical with regards to Mancham’s proposals, saying that they felt they should be the prime beneficiaries of any future possibilities and to open discussions with the British or the Seychelles Government.

A long road from exile to resettlement

The United Kingdom’s decision in the 1960’s to lease the main island of the Chagos archipelago, Diego Garcia, to the United States of America for use as a military base forced the inhabitants of the island to move out.

Some 2,000 Chagossians, otherwise known as Ilois (people of the islands), were forcibly evicted from the islands by the British government between 1968 and 1972, with many ending up destitute in Mauritius, and around 250 going to the Seychelles.

A sizeable number of the exiled population decided to move to the United Kingdom after they and their children were finally given eligibility in 2001 to apply for British citizenship, which was taken up by approximately 1,000 individuals.

In May this year, the British government permitted a small group of Chagossians, including six based in the Seychelles, to return to the islands for one week.