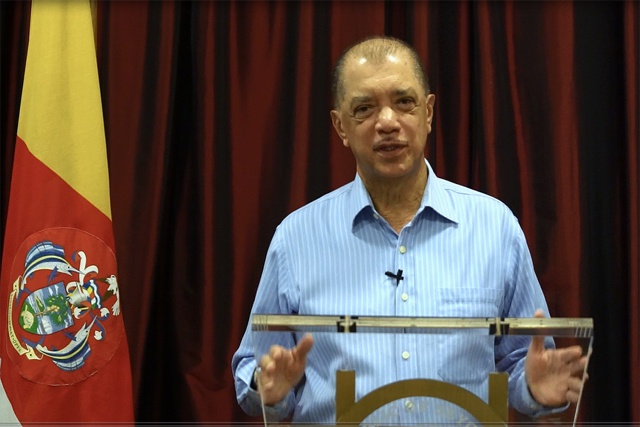 (Seychelles News Agency) - People in Seychelles will soon be called to cast their ballots on a date that will be decided by the Electoral Commission, now that the island nation’s President James Michel has called early presidential elections.

Michel declared his intention in a televised broadcast on national television, the Seychelles Broadcasting Corporation (SBC), this evening.

“…I have decided in accordance with article 52A (2) of the Seychelles Constitution to declare my intention to call the presidential elections,” said Michel.

"The proclamation would be published in the Official Gazette tomorrow. The date for the elections will be decided by the Electoral Commission.”

President Michel, aged 70, will be seeking what he says will be his third and final term of five years at the helm of the government of the 115-island archipelago off the eastern coast of Africa.

Michel was the first to announce in February that he would be presenting his candidacy, which was approved by the Seychelles ruling ‘Parti Lepep’ [People’s party] in June.

Since then, other political parties have followed suit announcing that they will also present a candidate. This includes the Seychelles National Party (SNP), the Seychelles United Party (SUP), the Popular Democratic Movement (PDM) and three new parties on the local political scene, the Independent Conservative Union of Seychelles (ICUS), the Seychelles Party for Social Justice and Democracy (SPSJD) and Lalyans Seselwa (the Seychellois Alliance).

Seychellois lawyer Philippe Boullé has also indicated that he will participate in his fourth consecutive Seychelles presidential election as an independent candidate.

It’s the first time in the history of the Third Republic, since Seychelles adopted its present constitution in 1993, that the number of people wishing to participate as candidates in the presidential election has more than doubled.

There are currently eight officially registered political parties in the Indian Ocean country with a population of around 93,000 inhabitants.