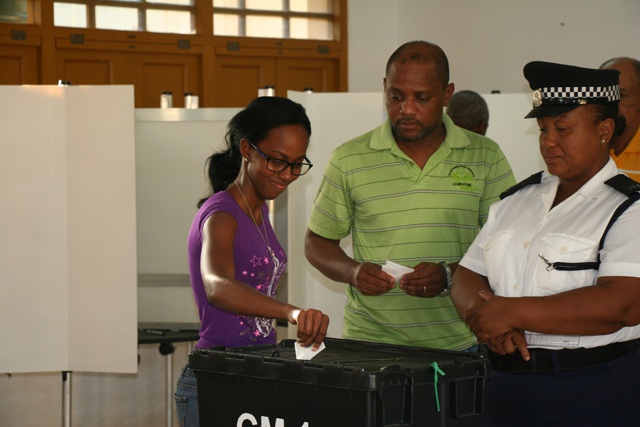 File Photo: A Seychellois voter casting her ballot during the presidential run-off last December. Seychellois voters are being called to the polls less than a year later in parliamentary elections set for September 8,9 and 10. (Seychelles News Agency)

(Seychelles News Agency) - Seychellois voters will be heading to the polls to elect their National Assembly representatives in less than two months. An official gazette publication on Friday confirmed September 8-10 as the voting dates.

Nomination day for candidates is August 17.

In a notice published at its office, the Electoral Commission has said that voter registration in the island nation is now closed with the announcement of the dates for the upcoming polls.

While voting on the first two days are for voters of all electoral areas residing and working on the outer islands and those who vote in special stations, the majority of voters from the three main populated islands -- Mahé, Praslin and La Digue - will cast their ballot on the main polling day -- Saturday September 10.

This will be the second time electorates of the island nation go to the polls in less than a year following presidential elections which ran into a historic run-off last December.

Registered political parties in the 115-island archipelago in the western Indian Ocean are expected to field candidates to stand in the 25 electoral districts.

The ruling Parti Lepep has already announced its line-up, the main opposition coalition, Linyon Demokratik Seselwa will be announcing theirs on Sunday. The other opposition parties who have announced their intention to stand are also expected to follow suit in the coming days, as campaigning for the polls is likely to intensify.

Early last month the Electoral Commission announced that parliamentary elections should be held anytime between June 11 and September 11 in accordance with the timetable set forth in the constitution.