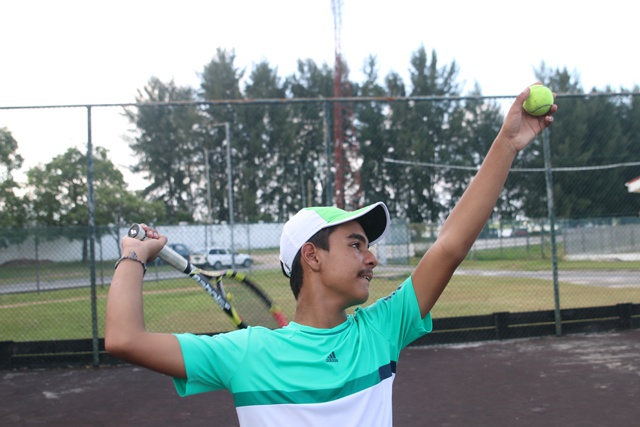 (Seychelles News Agency) - A young tennis player from Seychelles is making a big step toward achieving his dream of becoming a professional player as he joins the Justine Henin Academy in Belgium for one year.

Damien Laporte, who left Seychelles on Thursday accompanied by his parents, told SNA that: “I am very happy to get this opportunity, and I’m eager to join the academy. This is a dream come true for me.”

Laporte told SNA in an interview earlier this year that he hoped to one day get into an academy where he can train to become a professional tennis player.

The 14-year old from Seychelles, an archipelago in the western Indian Ocean, made history for the island nation when he won the Africa Junior Championship in March this year, earning him the No. 1 ranking in Africa for players under age 14. This is part of his achievement that was noted by the tennis academy.

This is not Laporte’s first time at the Justine Henin Academy. He also did a training camp there in July.

The academy is the creation of Justine Henin-Hardenne, a former Belgian professional tennis player, who opened the camp in 2007 with the aim to support, guide and evolve a player regardless of age, level or project.

Laporte told SNA he is ready for the next step in his tennis career.

“I have been travelling overseas for tennis half of my life so in many ways it has prepared me for this milestone.”

The parents of Laporte, who have been instrumental in helping their son advance his career, say they are proud of him.

“All the hard work has been done by him, and he always perseveres despite his very young age,” said his dad Mervyn, who also plays tennis.

Mervyn added that: “Today we find ourselves reaping the fruits of many years of hard work, stress and sacrifice but hopefully this is just the beginning. Our son has a talent, and we have always supported him to nurture it because tennis is in his blood.”

Both parents are accompanying Laporte for one week in Belgium and for his father Mervyn walking through the doors of the Academy with his son is especially significant.

“He has worked hard on and off the courts to help Damien despite the challenges. He is Damien's number one supporter. Damien understands the sacrifices his family has made and knows that he has our full support. We will all miss him, but we want the best for him.”

Being only 14, Laporte still needs to focus on his studies, and he will be schooling online during his tenure at the academy under the guidance of a course facilitator to supervise and advise him.

Apart from his parents, Laporte is receiving assistance from the Seychelles National Sports Council (NSC), and some sponsorship. Marie-Josee says, “We wish to renew our appeal for sponsors given that the fees at the academy are quite expensive. At the end of the day, Damien’s achievement is an achievement for Seychelles.”