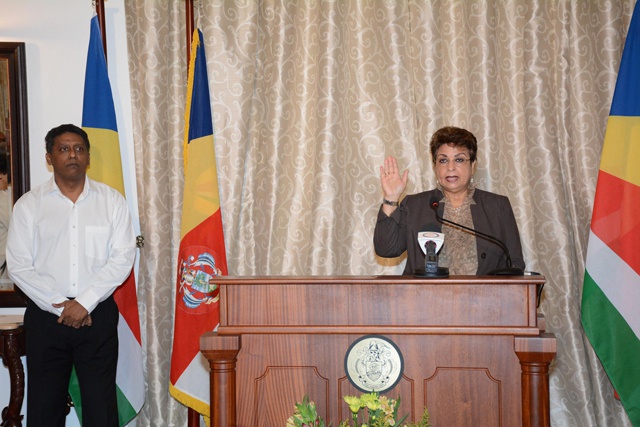 Macsuzy Mondon was sworn in to office in a ceremony at State House in the Capital, Victoria. (Joena Bonnelame, Seychelles News Agency)

Mondon was sworn in to office in a ceremony at State House in the Capital, Victoria. The country’s new Vice President Vincent Meriton and a new minister of cabinet Peter Larose were sworn in at the same ceremony.

“This means a lot to me. It represents another achievement,” Mondon told journalists after the ceremony.

“I am happy that I am the first woman to take this position…I hope that I have opened doors so that more Seychellois women can take such positions in future,” she added.

Mondon, 62, is the mother of three children. She started her career as a teacher and holds a Master’s in Education from Canada’s ‘Université du Québec à Trois Rivières’ [University of Quebec at Trois Rivières] in Canada.

Mondon is a former teacher who said her classroom days were among the best of her career.

The new designated minister was first appointed to a ministerial position in 2006, serving as the health minister. Over the past 10 years, she has mainly held the portfolio of employment and human resource development, which would later merge with education.

Mondon, who has been serving as the education minister since 2010, was approved as the designated minister by the National Assembly on Thursday. Fourteen members of the ruling Parti Lepep [People’s Party] voted for her appointment, while members pf the opposition party, Linyon Demokratik Seselwa, abstained.

For the first time in the history of the Seychelles parliament, the National Assembly summoned the ministerial appointees for questioning, a process that Mondon described as positive.

“I welcomed this as an opportunity to allow people to know a bit more about myself and how I have progressed in my career,” said Mondon, who is yet to know whether or not she will retain her ministerial portfolio of education.

Mondon will join the new Vice President and the other ministers as President Danny Faure chairs his first cabinet meeting on Saturday.