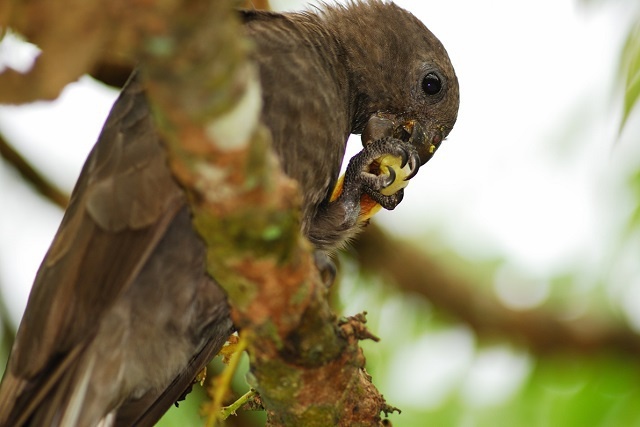 The Seychelles Black Parrot cannot be found anywhere else on Earth. (Gerard Larose, Seychelles Tourism Board)

(Seychelles News Agency) - Every year in the palm forests of Praslin, the second-largest island on the archipelago of Seychelles, a group of birds is monitored very closely during their breeding and hatching seasons.

The Seychelles Islands Foundation (SIF), a public trust which manages the unique endemic palm forest reserve of the Vallée de Mai on Praslin Island, painstakingly searches for black parrot nests and monitors them on a weekly basis throughout the season to count the number of eggs produced and monitor the hatching and fledgling stages.

With only a few hundred of these birds left in the wild, the black parrot is listed as ‘vulnerable’ on the IUCN Red List. Threatened by invasive bird species such as the Indian Mynah and the green ring-necked parakeet, black parrot chicks are in constant danger from other aggressive birds, feral cats, rats and even invasive ants. Even the endemic trees in which they need to nest are under threat - especially the coco de mer palm trees which have often been the victims of poaching for their famous coco de mer nuts.

Rimbault says it is surprisingly difficult to confirm predation attempts at nests because usually very little evidence is found to link potential predators to the disappearance of eggs or chicks.

“We suspect that there have been cases of rat predation this season although there has not been any direct evidence of this,” she said. “In one nest, yellow crazy ants were observed with two healthy chicks, and when the nest was monitored the following week the chicks were dead. We can't be sure but it's possible that these invasive ants contributed to the death of the chicks.”

When the monitored chicks reached around 25 days old in January this year, the SIF team fitted coloured rings to their legs to allow identification and monitoring after they leave the nest. Each chick gets its own unique colour combination and number.

The tiny fluffy white chicks that survive the perilous hatching phase slowly lose their baby feathers and after around 45 days, once their dark brown plumage has grown in, they take their first precarious flight out of the nest.

Although none of the rings from this year’s fledged chicks have thus far been confirmed from re-sightings, SIF has reported several observations of adult parrots feeding smaller parrots, which are thought to be the fledglings.

In addition to the successful nests this year in the Vallée de Mai and the neighbouring Praslin National Park, at least one nest is known to have been successful in another private reserve on Praslin Island called Fond Ferdinand, where an un-ringed fledgling was spotted in Fond Ferdinand.

“We only monitor parts of Fond Ferdinand and only a few nests per season so we don't have data to give a complete answer on [the population size],” said Rimbault. “In general, there seems to be good breeding activity in Fond Ferdinand, but the nests appear to be more spread out than in the denser coco de mer forest of the Vallée de Mai.”

The sighting in Fond Ferdinand is encouraging news for the conservationists, as it was thought the success rate of nests in Fond Ferdinand was low this season, with only one chick from the known nests surviving to fledging stage. SIF believes the parrots might have been more successful than initially thought in this reserve and are considering undertaking more extensive searches next season to find undiscovered nesting cavities.

For now though, SIF is satisfied that the Seychelles black parrot has clawed through another hard breeding season.

“Our monitoring suggests that the population is stable at the moment and there is no cause for concern,” Rimbault told SNA. “The most recent population estimate was conducted in 2010-11 and the total population was estimated to be between 550 and 900 birds. This is still thought to be the case.