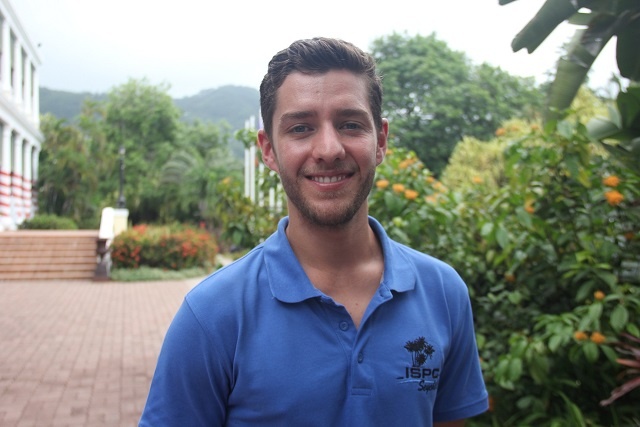 Baldwin will then return to his regular triathlon training, concentration on swimming, cycling and running, to prepare for competitions at distance events in the later part of 2018. (Patrick Joubert, Seychelles News Agency)

(Seychelles News Agency) - Seychellois triathlete Nick Baldwin will be participating in his first Eco-Friendly Marathon to be held in the country next year, he told the press on Thursday.

Baldwin made the statement after paying a courtesy call to President Danny Faure at State House in Victoria.

“I will be starting off the year with a marathon and that will be something that is quite different and new for me. I have never competed in a marathon event on its own before, so I am really excited to have the opportunity to participate [in one] here in Seychelles,” said Baldwin.

The 11th edition of the Eco-Friendly Marathon in Seychelles will take place on Sunday February 25. The marathon and half-marathon will set off from Beau Vallon in the north of Mahe at 7 a.m. along the northeastern areas and in the capital, Victoria. Deadline for registration is February 11.

Aside from medals and certificates, Seychellois winners in the male and female marathon and half-marathon will also get the chance to participate in the Namseungryong Marathon in South Korea.

Baldwin, 29, will then return to his regular triathlon training, concentration on swimming, cycling and running, to prepare for competitions at distance events in the later part of 2018.

“One of the first things will actually be increasing the emphasis on my run training and that will tie in very nicely with returning for the Eco-Healing Marathon in February,” said the athlete.

He added that running is something important in triathlons and “if you can have an advantage in the strong run leg at the end of the race, then you will be in a very strong position.”

Other than running, the Seychellois triathlete is looking to keep up the standard of his swimming and cycling trainings and maintain them at a high level.

Baldwin took the opportunity to discuss his 2017 performance with the president.

Targeting international events, Baldwin’s 2017 highlight was a third-place win during the Ironman in Japan that took place in June. He finished in fifth place at the Ironman Malaysia in Langkawi, last month.

“I also did win a regional race in Australia and it is always great to win in such events,” said the sportsman, who has been competing professionally for five years.

The win motivates the triathlete to comeback in 2018, to work harder and try to improve on these results. Baldwin also had his fair share of challenges during the year and said that he had two disappointing race-experiences, namely the Ironman Australia and Ironman Frankfurt – where he couldn’t complete the races.

“As an athlete, there are certainly periods and races that challenge you but those experiences also make you stronger and give you more motivation to try and put it right the next time that you have a chance to compete,” said Baldwin.

Baldwin advises young athletes to commit to their sport, persevere and keep believing that there are good opportunities and possibilities to do well in the future.

“The victories and the good moments that you get from sport certainly outweigh the disappointments that you inevitably have along the way,” said Baldwin.

The athlete ended 2017 ranking 71st on the Ironman World Ranking.