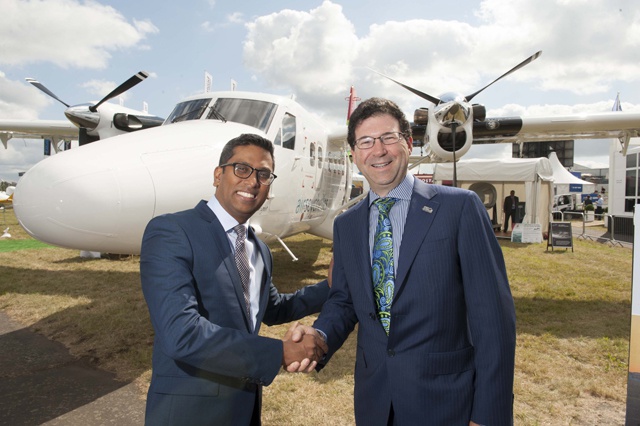 In a press statement, the airline has confirmed that it took delivery of the ‘Isle of Bird’ and ‘Isle of La Digue,’ as they have been named, from their manufacturer Viking Air Limited of Canada, yesterday

Air Seychelles’ General Manager for Corporate Affairs Alan Renaud has told SNA that ‘Isle of Bird’ is expected in the country today, while ‘Isle of La Digue’ which is currently on display at the Farnborough Airshow taking place this week in the United Kingdom, will arrive in Seychelles on July 26.

Both aircraft have travelled from British Columbia, Canada and in view of the long distance from there to the Indian Ocean Islands (17, 000 km) there has to be several stops at several airports in Canada, Europe and Africa before they can reach their final destination.

According to the press statement the aircrafts are being flown by two Air Seychelles’ pilots, Captains Sandy Benoiton and Eddie Cesar.

The airline had announced two months ago that the new additions will be arriving in the Indian Ocean archipelago in July one year ahead of the planned arrival of three aircrafts ordered from Viking Air.

Once operational they will be flying between the main island of Mahé and the second most populated island of Praslin as well as well as to other islands in the Seychelles archipelago, including Bird, Denis and Frégate.

Officially taking delivery of the planes from the Chief Executive Officer of Viking Air, David C. Curtis at the Farnborough Airshow in the UK where ‘Isle of la Digue’ is on display, Air Seychelles’ Chief Executive Officer Manoj Papa said the aircrafts “arrive at a time when Air Seychelles continues to improve its domestic flight operations, a satisfying reflection of our successful turnaround strategy.”

“Both deliveries are a win-win for Air Seychelles and the thousands of passengers who island hop on domestic services every year in Seychelles. They are the right tools at the right time for our airline,” added Papa in the statement.

For his part Curtis has expressed appreciation that the Seychelles national airline has chosen “the Twin Otter Series 400 their aircraft of choice for domestic services.”

“We also believe that our presence here at Farnborough will help to expand the Twin Otter Series 400 brand presence elsewhere in the world such as the Middle East and North African region,” said Curtis in the statement.

When it announced the early delivery of two of the aircrafts one year ahead of schedule in April, Air Seychelles said that the third Twin Otter aircraft is expected in the country by the third quarter of 2015.

Air Seychelles has been operating Twin Otters since 1980 and currently has three DHC-6 Series 300 aircraft and 1 DHC-6 Series 400 aircraft. The new fleet is yet another step by Air Seychelles to diversify its domestic services which also follows the start of the airline’s first inter-island domestic cargo service for the benefit of hotels on Praslin at the beginning of April this year.