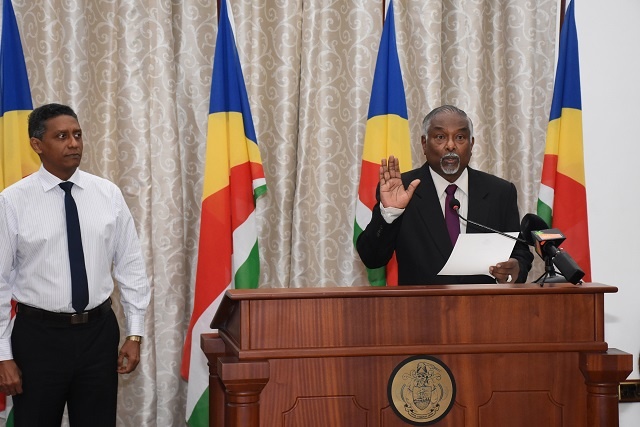 Bernardin Renaud was sworn-in as the chairperson of the Seychelles Human Rights Commission at State House, Victoria on Wednesday. (Louis Toussaint)

(Seychelles News Agency) - A strong adherence to human rights will enhance Seychelles' reputation in the world when it comes to investment, tourism and standing, the newly sworn-in chairperson of the Human Rights Commission said.

Bernardin Renaud was sworn-in as the chairperson of the Seychelles Human Rights Commission at State House, Victoria on Wednesday.

“I believe that the world will look at Seychelles with a different eye when it comes to the question of investment, for example, or visitors coming here especially as we have the tourism industry. A high level of human right as per our charter and international obligation will help greatly in the socio-economic aspect of Seychelles,” said Renaud.

Despite popular belief, human rights are not only the question of checking the rights of individuals, he said.

The Commission was established by the Human Rights Commission Act in 2018. It is a self-governing, neutral and independent body that is not subject to the direction or control of any person or authority.

The Commission will advise the government on matters related to the protection of human rights, in administrative practice as well as in proposed legislation. It will also undertake research and sensitisation programmes for the furtherance of human rights and monitor Seychelles’ compliance with the terms of international conventions and charters relevant to the functions of the Commission.

The other four members of the Commission were sworn-in on March 1. At that time, Renaud was appointed as the chairperson designate of the Commission since he was serving as Justice of the Seychelles Court of Appeal. He took his retirement in May.

He said that the Commission has already received complaints and concerns from the public and institutions, all of which are on hold until they have a working space. For the moment the Commission is giving advice on what can be done and paths that can be taken.

"However, should there be a humanitarian crisis, despite not having an office, we will meet immediately have to take a decision," he said.

Renaud is one of the longest-serving public officers, having joined the civil service in 1965. He served as Labour Commissioner from 1979 to 1985.

He played a key role in the transition of Seychelles from a one-party state to a pluralistic system when he chaired the meetings of Constitutional Commission that laid out the foundations for the Constitution of the Third Republic. Renaud was also the director of elections for the referendum that approved the Constitution, as well as for the first presidential and National Assembly elections under the multiparty democracy in 1993.