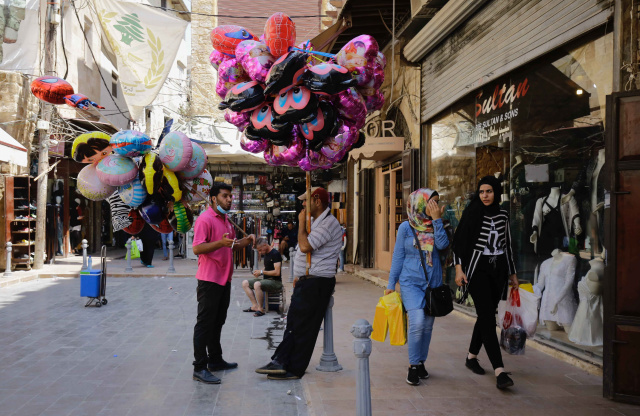 Residents of the northern Lebanese city of Tripoli buy goods on July 30, 2020, as Muslims across the world get ready to celebrate Eid al-Adha. The Lebanese pound has in past months lost around 80 percent of its value against the dollar on the black market.
In a country where most consumer goods are imported, that devaluation has had a huge impact on prices and the purchasing power of ordinary Lebanese. (Ibrahim CHALHOUB / AFP)

(AFP) - Hundreds of Libyans marched in the capital Tripoli on Sunday evening to protest deteriorating living conditions and denounce corruption in the war-torn country, witnesses said.

Angry at extended cuts to power and water, and long lines at petrol stations, the mostly young people marched in the streets of the city centre, chanting slogans including "No to corruption!"

Libya, which sits atop Africa's largest proven crude oil reserves, has endured almost a decade of violent chaos since the 2011 NATO-backed uprising that toppled and killed veteran dictator Moamer Kadhafi.

The war-weary country is plagued by water shortages and power blackouts that snuff out air-conditioners in the searing summer heat.

The deplorable situation has been compounded by the novel coronavirus pandemic, which has depressed global oil prices and spread in the country despite social distancing measures.

"We are tired of living without hope," Ayman al-Wafi, a young man in his twenties, told AFP by telephone from the protest.

Ignoring restrictions in place to curb the spread of the virus, the protesters marched in front of the seat of Libya's Government of National Accord (GNA) before gathering in Martyrs' Square.

Police vehicles and security forces were present at the march, according to witnesses and videos shared on social media.

The protest comes just two days after the country's warring rival administrations announced separately that they would cease all hostilities and hold nationwide elections.

The surprise announcement Friday was made by Fayez al-Sarraj, head of the UN-recognised GNA, and Aguila Saleh, speaker of the eastern-based parliament backed by military strongman Khalifa Haftar, who launched an abortive offensive in April 2019 to seize Tripoli.

But the prospect of a let-up in violence came as coronavirus cases skyrocketed 15-fold in Libya since June, the ICRC said, warning this was further deepening a dire humanitarian crisis.

"Infrastructure all over the country is falling apart. People have little electricity, drinking water, sanitation, or medical care in the middle of a growing pandemic," International Committee of the Red Cross president Peter Maurer said in a statement.