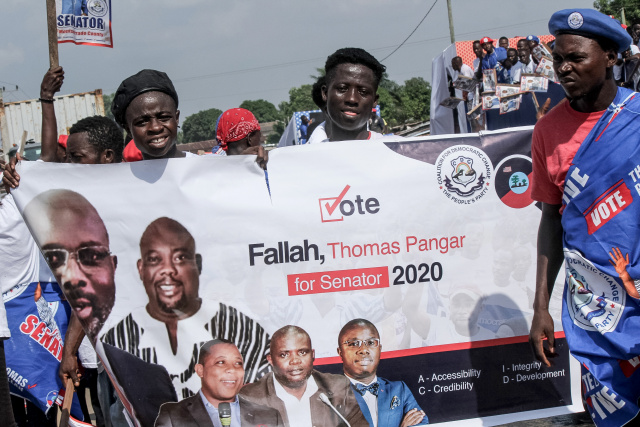 Supporters of Liberia's President George Weah gather during a campaign rally in Monrovia on December 05, 2020. Voters in Liberia will head to the polls to choose whether to lift the ban on dual nationality, and cut presidential terms, in a constitutional referendum on December 8th. (Zoom DOSSO / AFP)

(AFP) - Liberians vote Tuesday in a referendum on shortening presidential terms, a change some members of the opposition fear President George Weah will exploit to extend his stay in office.

Ballot papers will also ask voters whether to lift a ban on holding dual nationality, a divisive issue in the poor West African nation founded as a haven for freed American slaves in the 19th century.

Weah, a former footballing icon, wants to cut the length of terms for presidents and lower-house lawmakers from six to five years; and from nine to seven for senators.

"I strongly believe keeping someone in power for long is not the way to go,” the 54-year-old told supporters during a rally in the northwestern town of Tubmanburg last week.

Reducing term limits is a relative novelty for the region, where ageing presidents have followed a pattern of clinging to office using constitutional changes.

In Guinea, for example, 82-year-old President Alpha Conde won a controversial third term in October after pushing through a new constitution that allowed him to bypass a two-term limit.

The same month, Ivorian President Alassane Ouattara, 78, was a elected for an equally contentious third term, after having revised the country's constitution.

Weah's critics fear the president is pursuing the same goal.

"President Weah will seek a third term simply because the first six years would then be under (a) different constitutional arrangement," said opposition senator Darius Dillon.

A "yes" vote would be a mistake, he said.

Raised in the capital Monrovia's slums before going on to a glittering football career with AC Milan and Paris St Germain, Weah was an idol to Liberia's poor when he was elected in 2018.

But the former striker's popularity has waned given the continuing poor living standards in the nation of 4.8 million people.

Some view the referendum -- as well as concurrent mid-term senatorial elections -- as a bellwether on support for the president.

Still only in his first term, Weah firmly denies that the referendum is designed to keep him in power.

Liberia is one of the poorest countries in the world, and is still recovering after back-to-back civil wars from 1989 to 2003 and West Africa's 2014-16 Ebola crisis.

Weah has faced protests for ongoing economic problems, which include soaring inflation, and regular cash and fuel shortages.

But the president has sought to counter the impression that the referendum is a verdict on his rule. The constitutional changes "benefit all Liberians", he said in a statement in November.

The Collaborating Political Parties (CPP), a leading opposition coalition, argues that few understand the referendum and has urged its supporters to boycott the poll.

"We don't even know what the implications are when you vote 'yes' or you vote 'no'," CPP secretary-general Mohammed Aly told AFP, warning that Weah could seek further terms.

Liberians are also voting on whether to repeal a 1973 ban on dual nationality, a move some hope could be an economic boon.

The ban has long been viewed as hypocritical in some quarters, as many members of the American-Liberian elite secretly hold US citizenship and are accused of transferring money abroad.

Hundreds of thousands of other Liberians are also thought to reside overseas, having fled war and poverty.

Weah's office said in a November statement that nationality restrictions -- which include a ban on property ownership for non-Liberians -- are "inconceivable" and "unfair".

"This administration has decided that once you were born a Liberian you must always remain a Liberian," CDC lawmaker Acarus Gray said, adding that dual nationality would "beef up our economy".

Edward Gayflor, a 48-year-old Liberian who fled to the US during the civil war and acquired US citizenship, agreed.

"I believe it is time Liberians say yes to dual citizenship so we can have the opportunity to contribute to the development of the motherland," he said.

But there are fears that wealthy diaspora members could wield an outsized influence in Liberia.

Should the referendum overturn the dual-nationality ban, Liberians with two passports will still remain barred from elected office.

About 2.5 million people are registered to vote, according to the country's national elections committee.

Africa » Be a reporter: Write and send your article » Subscribe for news alert
Tags: Liberia, politics