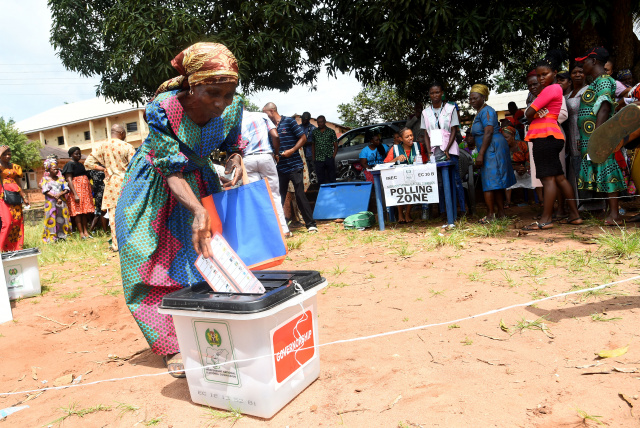 A woman votes at a polling station during the Anambra State governorship election at Uga Aguata district in south-east Nigeria, on November 6, 2021.
Voters in the restive southeastern Nigerian state of Anambra go to the polls on November 6, 2021, amid a massive police deployment, in a key test of electoral credibility ahead of a presidential race less than 18 months away. More than 30,000 police have been deployed to Anambra, the heart of a region where an outlawed separatist movement has been blamed for a string of attacks on police and election offices. (PIUS UTOMI EKPEI / AFP)

(AFP) - Nigerian electoral officials were tallying results from a local vote on Sunday after a tightly contested race seen as a test-run for national elections to replace President Muhammadu Buhari in early 2023.

Thousands of police and army were dispatched to Anambra state for the election of a local governor, in a year that has seen a string of attacks on official targets blamed on an outlawed separatist group known as the Indigenous People of Biafra (IPOB).

Voting went ahead mostly without major incident on Saturday but technical glitches with face and fingerprint recognition technology caused delays and forced the electoral commission (INEC) to extend voting hours.

"We are getting ready for collection, people are coming from local government areas with their results now," an INEC official said.

Nigeria's elections are often marred by fraud claims and violence, and analysts said the Anambra vote in a complex security situation would measure confidence in INEC’s readiness for the presidential ballot.

IPOB agitates for an independent state for the local Igbo people, a sensitive claim in southeast Nigeria where a unilateral declaration of independence by Igbo army officers in 1967 triggered a three-year civil war.

Africa’s most populous country is also battling heavily armed gangs in its northwest, where so-called bandits are blamed for scores of mass kidnappings for ransom.

The army is also entrenched in a 12-year campaign against jihadists in the country’s northeast.

Anambra's election was a race between former central bank governor Charles Chukwuma Soludo, whose All Progressive Grand Alliance has run the state for years, and the candidates from Buhari’s All Progressives Congress (APC) and main opposition People’s Democratic Party (PDP).

Campaigning was low-key after attacks blamed on IPOB or "unknown gunmen" and several protests by the separatists over the arrest of their leader, who was detained overseas and brought back to Nigeria earlier this year.

With political infighting heating up before 2023, Anambra emerged as key battleground.

The ruling APC is looking to consolidate recent gains in the southeast, where it managed to secure two state governments -- one through a defection and the other through a court ruling.