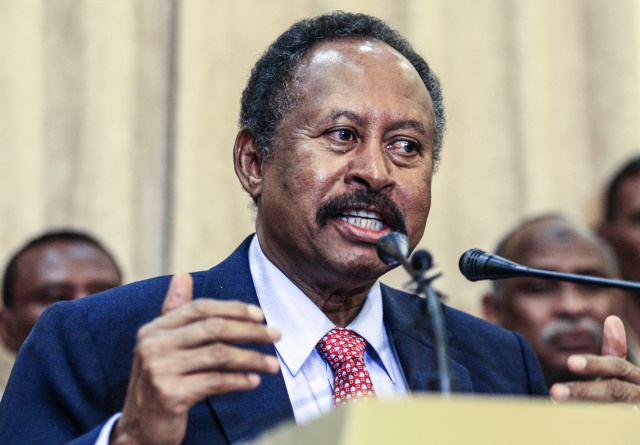 (FILES) In this file photo taken on August 21, 2019 Abdallah Hamdok, speaks after being sworn in as Sudan's interim prime minister in the capital Khartoum. Sudan's Prime Minister Abdalla Hamdok, the face of the country's fragile transition to civilian rule for more than two years before he was ousted and detained in an October coup then reinstated last month, resigned today in another blow to the turbulent African nation. (Ebrahim HAMID / AFP)

(AFP) - The resignation of Sudan's prime minister leaves the military in full command and threatens a return to the repressive policies of the regime of ousted strongman Omar al-Bashir, analysts say.

After months of street protests and violent crackdowns that have claimed at least 57 lives, observers fear more bloodshed ahead after premier Abdalla Hamdok stepped down late on Sunday.

In his farewell address on national TV, Hamdok said he had tried to prevent Sudan "from sliding toward disaster" but that it was now at a "dangerous crossroads threatening its very survival".

"Hamdok's resignation has left the military in sole command of the country," said Magdi al-Gizouli of think-tank the Rift Valley Institute. "Protesters will take to the streets again and will be left to face more violence."

Since its independence from Britain and Egypt in 1956, Sudan, now one of the world's poorest countries, has been mostly under military rule with only rare democratic interludes.

It has been navigating a fragile transition toward full civilian rule since the April 2019 ouster of veteran president Bashir following an unprecedented wave of youth-led protests.

Bashir, who is wanted for war crimes in the Darfur region by the International Criminal Court, was jailed as Sudan took steps to rejoin the international community and obtain debt relief, foreign aid and investment.

Burhan reversed Hamdok's ouster and reinstated him on November 21, also promising elections in mid-2023 -- but the protest movement had lost all faith in both leaders and kept up their demonstrations.

They accused the civilian leader Hamdok, a former international economist, of "betrayal" and "legitimising the coup regime".

In the weeks since, Hamdok had failed to form a new government, and local media reported in recent days that he had not shown up at his office.

Gizouli said the parties to Sudan's November deal had hoped it would "reduce the agitation on the streets" and allow them to find a way "to rework the constitutional arrangements".

"But all this did not happen," he said.

Instead, Hamdok had found himself "paralysed" and "not able to get anything done, neither politically nor administratively".

Some observers now fear that Hamdok's resignation signals a reversion to the kind of rule Sudan saw under the Islamist-backed regime of Bashir.

Sudanese analyst Kholood Khair wrote on Twitter that Hamdok's resignation "removes any facade the #SudanCoup generals can enjoy and present this coup as anything other than a reversion to the Islamo-military politics of Bashir.

"Though Sudan's future is uncertain, the clarity helps all to see this coup for what it is."

"Sudan's next PM and cabinet should be appointed in line with the constitutional declaration to meet the people's goals of freedom, peace and justice," the US Bureau for African Affairs said.

Activists have stepped up their calls for more anti-military protests from Tuesday and called on demonstrators to again head to the presidential palace in Khartoum "until victory is achieved".

It also allows security forces to enter and search "any building or individual" and impose "surveillance of any property and facility".

"The stakes are now very high," said Gizouli, who argued Hamdok had been "a possible mediator between all sides".

"Now it's an open confrontation between security forces and the old system, excluding Omar al-Bashir, and a leaderless movement on the streets based on the activism of young people."

John Prendergast, of The Sentry think-tank, argued that foreign powers should not stand idly by.

"The longer the United States and European Union wait to create consequences for the actions of the military rulers," he wrote, "the more the regime is consolidating its economic and political power, to the great detriment of Sudan's population."