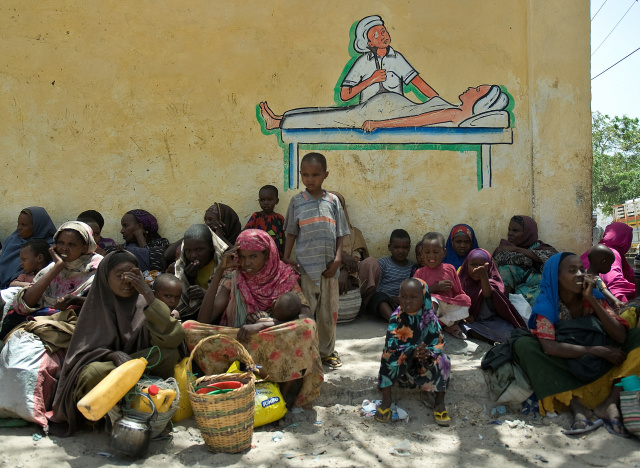 "The time to act is now," he told reporters in Geneva via video-link, cautioning that "if you wait until things get worse, or until famine is declared, it may be too late."

Somalia has been hardest hit as the Horn of Africa region grapples with its worst drought in decades, with the UN warning that 4.1 million people -- a quarter of the Somali population -- need urgent food aid.

Chinyama said children were paying the highest price in the hunger crisis, with 1.4 million of them, or nearly half of all those under the age of five, expected to suffer from acute malnutrition by the end of the year.

"Of these, 330,000 will need treatment for severe acute malnutrition," which can lead to death, he said.

UNICEF, he said, urgently needs $7 million by March to purchase the therapeutic foods needed to treat those children.

Without the additional supplies, "100,000 children with severe acute malnutrition will miss out on life-saving treatment," he warned.

Severe acute malnutrition can cause stunting and wasting and leaves children so weak that they become far more vulnerable to diseases.

For "a severely acutely malnourished child, or severely wasted child... the risk of them dying from diseases such as measles or diarrhoea is 11 times higher than for a well-nourished child," UNICEF spokeswoman Marixie Mercado said.

That is a particularly concerning statistic, since the drought has also sparked a severe water crisis in Somalia, and in turn more disease outbreaks.

Some 7,500 measles cases were registered in the country in 2021 -- double the caseload for 2019 and 2020 combined, while around 60,000 people are at risk of contracting diarrhoeal diseases, including cholera, UN figures show.

The drought is also spurring a migration crisis, Chinyama said.

Around 500,000 people have left their homes in search of food, water and pasture since November, adding to the 2.9 million who were already displaced inside the country.

Drought and displacement also increase other risks for children, including from armed groups in Somalia, where the Al-Shabaab Islamist militant group controls swathes of countryside.

"In many instances, these children were victims of multiple violations," Chinyama said.

In all, UNICEF has said it needs $48 million to respond to the crisis in Somalia this year. So far, it has received only $10 million.