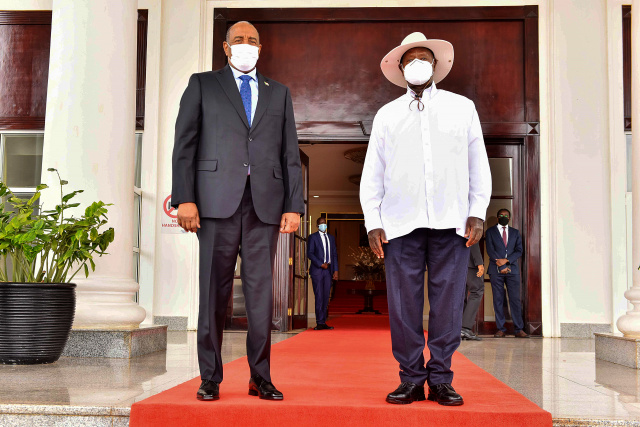 This handout picture taken on March 17, 2022 and released by Presidential Press Unit Uganda, shows General Abdel Fattah Abdelrahman Al Burhan (L), the Chairman of the Transitional Sovereignty Council of the Republic of the Sudan and Ugandan President Yoweri Museveni (R) posing prior to a bilateral talks at the State House, in Entebbe. (Photo by Handout / Presidential Press Unit of Uganda / AFP)

(AFP) - The African Union has said it will not be party to talks that exclude significant actors in an efort to get Sudan's transition back on track afer last year's military coup.

Sudan's main civilian players have so far boycotted talks with military leaders launched under international auspices earlier this month on reaching a political accommodation that would enable the restoration of desperately needed Western aid.

"The AU cannot continue these dishonest, opaque discussions which sideline participants or treat them in an unjust way," the bloc's ambassador to Sudan, Mohammed Belaiche, told reporters late Tuesday.

But the AU denied it was abandoning the so-called "troika" of sponsors of the talks process, which also includes the United Nations and East African regional grouping IGAD.

That was an "erroneous interpretation" of Belaiche's comments, its delegation said in a clarification Wednesday.

"The AU representative states that he will not attend some of the activities because they are not transparent, do not respect all participants and do not conform to the principle of nonexclusion from the political process."

The pan-African bloc suspended Sudan afer the military's October 27 overthrow of a joint civilian-military transitional government installed in the afermath of the army's 2019 ouster of longtime president Omar al-Bashir.

Many foreign donors cut of aid, which accounts for 40 percent of state revenues, prompting military leader Abdel Fattah al-Burhan to agree to the talks launched by the troika this month.

But the talks have been undermined by a boycott by all significant civilian players, including both Sudan's established political parties and groups born out of the mass protests that led to Bashir's ouster.

Since US envoys failed to persuade the civilians to give the talks a chance, the process has been put on hold indefinitely.