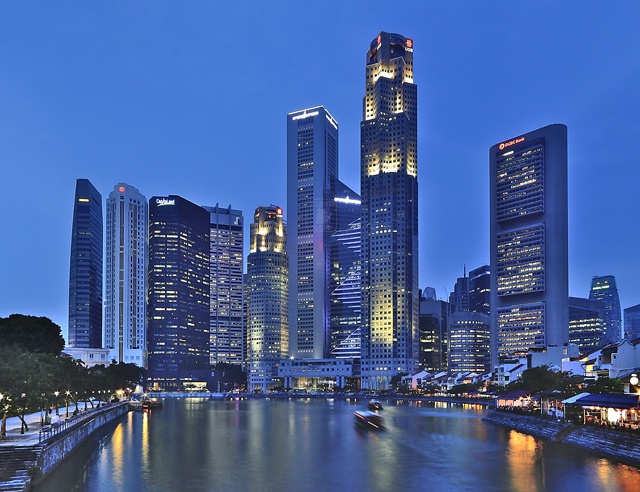 Singapore Skyline at blue hour (Wikimedia) The recent signing of a double taxation avoidance agreement between Seychelles islands and Singapore will allow businesses operating in the two countries to pay tax in one of the jurisdictions and avoid taxation in the other Photo License: CC BY 2.0

(Seychelles News Agency) - The Seychelles islands and Singapore have concluded a double taxation avoidance agreement, which will allow businesses operating in the two countries to pay tax in one of the jurisdictions and avoid taxation in the other, which is expected to encourage trade and investment between the two countries.

An agreement for the Avoidance of Double Taxation and the Prevention of Fiscal Evasion with Respect to Taxes on Income (DTA) between the Seychelles and Singapore which was signed earlier this month in New York is the latest in this quest by the Indian Ocean island nation. Facilitating trade between the Seychelles and other nations is part of ongoing efforts to open up and modernise the country’s economy, following a successful five-year IMF-backed economic reform programme launched in 2008 by Seychelles’ President James Michel.

According to the Seychelles foreign affairs ministry the agreement was signed in New York between the Seychelles Ambassador to the United Nations, Marie-Louise Potter and her Singaporean counterpart, Karen Tan on July 9.

This is the fourth double tax pact to be signed between Seychelles and other countries this year. The other agreements previously signed include Ghana, Kenya and the island state of Guernsey. The archipelago has so far signed a total of 21 double taxation avoidance agreements with other nations and the archipelago’s finance, trade and investment ministry has said that the number is expected to reach 24 by end of 2014.

A good deal on dividends

The terms of the DTA will only come into effect on the first of January of the year after it has been ratified by both countries.

The accord is aimed at strengthening relations between Seychelles and Singapore  and provide trade and investment  incentives to nationals of both countries  without having to shoulder taxation liabilities in both countries.

“The basic objective of such an agreement is to avoid taxation of income in both countries and to promote and foster economic trade and investment between the two countries,” a statement released by the foreign ministry says.  “The agreement thus provides for certainty with respect to taxes payable on incomes generated from investments made between both countries.”

Both countries are expected to notify each other upon completion of the procedures required by their domestic laws for ratification and implementation of the agreement.

The absence of mineral resources and arable land for agricultural production has made the country a net importer of goods such as machinery, food, manufactured goods and fuels. Current intense, petroleum and gas exploration is underway in the Seychelles’ extensive Exclusive Economic Zone (EEZ).

According to the Seychelles National Bureau of Statistics (NBS) the country, exported goods worth just over $300 million in 2012, including fish products, sea cucumbers and medical supplies.

Of this only products worth $100,000 was exported to Singapore. In the same year, Seychelles imported over $1.1 billion of goods, of which approximately $43 million (3.8% of the total) came from Singapore.

Although the Seychelles archipelago of 115 islands is most well-known for its appeal as a tourist destination with a well-established fisheries industry, the country is fast becoming a hub of thriving offshore financial business sector in the world.