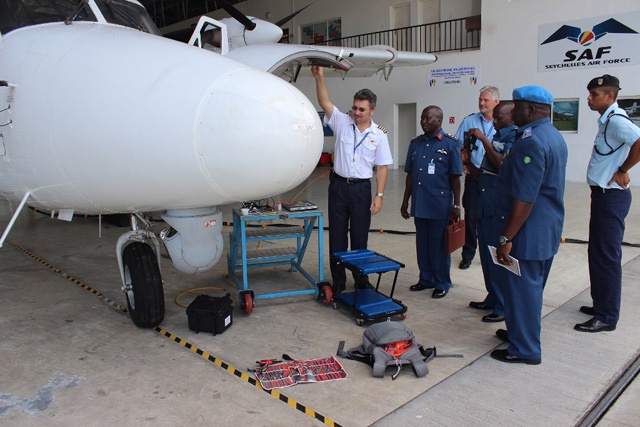 Tanzanian delegation and the Seychelles Air Forces, together with members of EUCAP Nestor at technical briefing on capabilities of air crafts and surveillance systems. (EUCAP Nestor)

According to a press statement from EUCAP Nestor, the exchange is the first of its kind between the Seychelles and Tanzanian air forces, where they assessed  air  surveillance capability of the SAF that has been developed in the past year in close cooperation with EUCAP Nestor.

Stories of fishermen lost at sea or boats in distress are not uncommon in Seychelles, an archipelago in the Indian Ocean with over 1.3 million square kilometres of ocean, however, recently greater threats, that of piracy or illegal fishing have been affecting fisheries, the second most important economic sector of the country which is made up of just over 90,000 people.

During his visit, Colonel Kapinga met with the Chief of Seychelles Peoples’ Defence Forces (SPDF) Brigadier Leopold Payet at the SPDF Headquarters, on the main island of Mahe, where  he “expressed his appreciation for this cooperative and collegiate approach which will greatly assist the future Tanzanian Air Surveillance capabilities,” reads the statement.

The colonel says that air surveillance will not only help Tanzania for “maritime purposes but also to assist in border monitoring and to support combatting poaching of wildlife.”

The three Tanzanian officers also participated in an operational flight to see first-hand the capability of the surveillance systems and processes linking the air-patrolling with mission preparation, in- flight reporting, mission debriefing, reporting and analysis of information and imagery by the SAF imagery and intelligence section.

“It is the very first time that we are exchanging on this subject and I am glad to share the experience we gained over the years with regards to air operations with them”, said Captain Rodney Zarine, adjutant at the Seychelles Air Force..

The EUCAP Nestor’s Head of Country Office in the Seychelles, Bo Holtse, says this is the first time that two countries in the mandated area of EUCAP Nestor has “engage in knowledge-sharing on development of air surveillance capabilities.”

Holtse, states that the “ enthusiasm by both Air Forces is proving just how vital it is to form regional links, to share information and experiences by regional counterparts”. Holtse also notes that assisting the sustainable development of capabilities and facilitating of the transfer of knowledge between countries of the region is in the core of the mandate of the civilian mission.

Earlier this year EUCAP Nestor’s mission’s mandate was extended up to December 2016.

The EUCAP Nestor works towards enabling countries of the horn of Africa and the western Indian Ocean to better master effective surveillance of their territorial waters, in order to help in the fight against piracy.

The Seychelles have benefitted through numerous trainings which aim to increase the capacity and know how of the country’s coastguards and air force.

The mission had a budget of 16 million US$ for the November 2013-  October 2014 period, with a workforce of around 100 international personnel, of whom around 70 operate out of Djibouti, 15 for Somalia but based in both Somalia and Nairobi, 10 in the Seychelles and one in Tanzania.

Seychelles and Tanzania, close allies of the past and present

As neighbours with maritime borders and close ties during the African decolonization period of the 1970s, Tanzania remains a traditional ally of Seychelles with military exchanges dating back to the late 1970s and early 1980’s where the Tanzanians were instrumental in training the Seychelles military or what was known then as  the people’ s militia following  the June 5th 1977 coup d’état by France Albert René.

Recently, the national airline, Air Seychelles, announced new direct flights to Dar es Salaam in Tanzania. The flights which are expected to commence in December are expected to further enhance the relationship that exist between the two countries as well as encourage tourism, a sector which for both, plays a major role in their economy.